Politi, whose art celebrated the cultural diversity of Los Angeles and particularly the city’s children, is the father of Suzanne Bischof of Mountain Center.

Politi was a very good friend with former CSU, Fresno professor Arne Nixon, which is why the university opened phase 1 of the garden in 2010 after the centennial and celebrations honored Politi in 2008.


But Bischof ensnared Cook before that. Many stain glass windows adorn his Idyllwild home. Nearly six years ago, during a dinner party, the beauty of Cook’s stain glass works compelled Bishoff to ask if Cook worked with mosaics. Politi had made several mosaics in front of his Angeleno Heights home and Bischof was hoping Cook could reproduce them for the Fresno garden.

“Maybe if you can cut glass you can cut tile,” Bischof asked. “It will be exciting; we can do this,” Cook replied quickly. 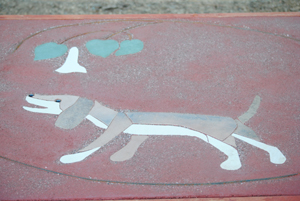 Cook’s initial enthusiasm never wavered and he has recently completed five large mosaic panels. Early this summer they will be transported to Fresno for the garden’s dedication this fall.

Cook has been creating stain-glass art and painting for nearly 40 years, but this was his first mosaic effort. So he also had to invest time researching mosaic techniques and Politi’s pieces. He bought tiles to practice cutting and assessing composition and nature.

Of course, perfectly matching color and texture was impossible. Politi gathered his materials from wherever he found them during his jaunts through Los Angeles and its diverse neighborhoods. Cook had to use modern suppliers, which will help the longevity of Cook’s work.

“Politi’s tiles were more fragile and not necessarily to be used outside; the glazing is starting to flake,” Cook noted and added he was careful to select outdoor tile.

Politi is known as the Artist of Olvera Street and for his mural “Blessing of the Animals” at the entrance there; for more than 20 children’s books he authored and illustrated; and numerous paintings and sketches of life in and around Los Angeles’ diverse neighborhoods.

Politi was born in California, but his family returned to native Italy, where he went to school, early in his youth. But sketching was always his desire and life, Bischof said. “He told me he would sketch in class and got bad grades,” she said. “But his mother was very encouraging.” He eventually earned a scholarship to art school.

When he returned to Los Angeles he would draw pictures for people walking around town. Olvera Street was one of his favorite haunts, but he loved the melting pot character of the city, his daughter said. He would come home with a 2- or 3-inch stack of sketches from which he would choose a few to paint.

His daily walks and evening work kept him busy, but “my mother was made in heaven for him,” Bischof added.

“John’s work was an honor,” Bischof said. “He was true to my father. It was a total labor of love. He had three done before he got an agreement.”

Each panel took a different amount of time, Cook said, “It depends on the temperature, the moisture and the number of tiles.”

Bischof has several of Politi’s art pieces, such as two sculptures, at her home on the mountain. Her brother Paul also shares their father’s legacy.