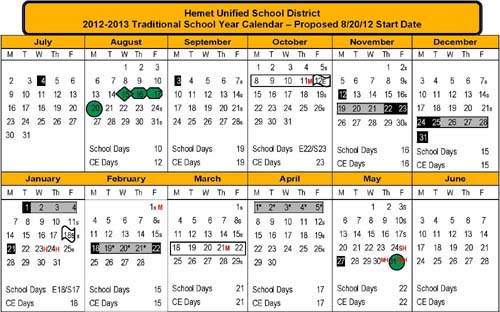 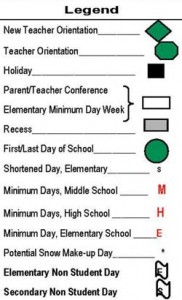 The Hemet Unified School District approved a school calendar, and Monday, Aug. 20, will be the first day of the next school year.

At its previous meeting, the board asked for new calendar options from staff. At its Tuesday, Feb. 7, meeting, the board chose the Aug. 20 start date, and no major objections were raised for the date. The discussion of the item was not perfunctory, and several trustees reluctantly accepted this date, although they had personal preference for the alternative of starting school on Sept. 4, after Labor Day.

Trustee Paul Bakkom urged his colleagues to choose this option. He argued that the earlier start was harder for younger students who needed more time to acclimate to a structured school environment.

“I’m enthusiastically for the Sept. 4 start date,” Bakkom said. “The reason is the number of students who used to do testing in May. A start date in August can make a huge difference in maturity.”

His point was a continuation of the board’s earlier discussion about seeking to waive the transitional kindergarten for the 2012-13 year, which was also reluctantly approved. According to Vince Christakos, the business services assistant superintendent, the waiver would potentially affect 128 students this fall.

With a later start of the school year, Bakkom felt the district would save some money and energy by replacing August afternoon temperatures with cooler June days.

While there was some informal support for his motion, HUSD President Bill Sanborn reminded his colleagues that fall sports start in the middle of August and delaying the school start would mean athletes would have two or three games before classes opened. The board finally agreed to the August start.

The last day of school will be Friday, May 31, 2013. During the year, several weeks of recess are scheduled, beginning with Thanksgiving, the traditional Winter or Christmas Recess in December, Presidents’ Day in February, and Spring Recess in April. The Winter Recess will be two weeks, Dec. 24 through Jan. 4, not three as proposed at the previous board meeting.

The board also approved a waiver request to the state Department of Education to increase its class size cap for grades four through eight. The average number of pupils per each full-time teacher in those grades could increase from 29.9 to 34.

This is HUSD’s third request for class size waiver. A waiver is necessary because of the current statewide educational budget problems and the district’s reduced revenue, according to Christakos.