Idyllwild Arts closes its 2011-12 theatrical season with a whirlwind time-travel trip from “Berlin to Broadway” — a musical voyage from pre-World War II Germany to Broadway’s Golden Age through the music of one of the 20th century’s most influential composers, Kurt Weill. Howard Shangraw, Idyllwild Arts theatre chair, directs his acting company in this production.

The excursion begins at 7:30 p.m. Friday and Saturday, May 18 and 19 and a final tour begins at 2 p.m. Sunday, May 20. All of the voyages depart from the IAF Theatre, on the Idyllwild Arts campus.

This biographical journey of music offers songs that have become standards in the modern musical lexicon. For example, “Mack the Knife,” “Lost In the Stars,” “Surabaya Johnny,” “September Song” and “My Ship” will be among many musical memories. These songs give a glimpse of Weill’s life and recount his journey from pre-Nazi Germany, to his escape to France and ultimately to his new country, America.

Weill’s amazing list of lyricists includes Bertolt Brecht, Alan Jay Lerner, Ira Gershwin, and the cast sings and dances excerpts from “The Three Penny Opera,” “Happy End” “Lady In The Dark,” “Street Scene,” “The Rise and Fall of the City of Mahagonny” and more.

Come and join the Idyllwild Arts cast for this amazing evening and be prepared to leave the theatre humming a beloved tune or two. 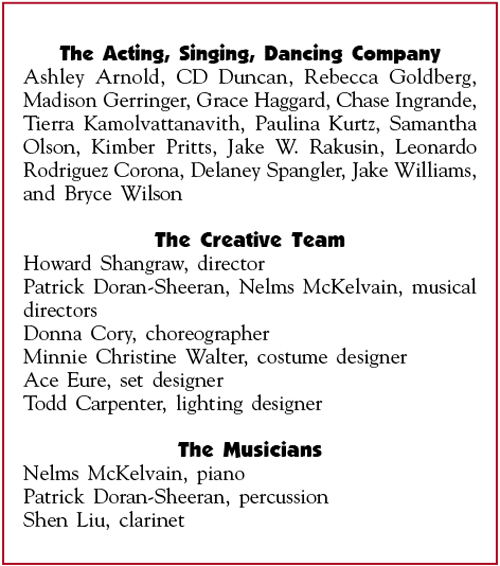