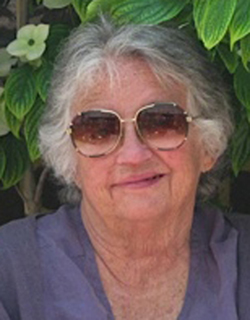 My mother’s connection to Idyllwild started long before she was born. Her Grandma T used to drive an old Packard automobile up the dirt road from Hemet to Idyllwild to enjoy the sparkling air. (On one of the trips the radiator hose burst, and Grandma T tied it back together with a ribbon off the picnic basket. Grandma T was fierce.)

Grandma T and her daughter Roberta spent many summers in Idyllwild. When Roberta was 16, she was riding horseback across a meadow in Fern Valley. Right then a young pilot landed his plane in the meadow in search of a good lunch. He saw the attractive woman riding horseback so he removed the spark plugs from his plane and feigned that it wouldn’t start again. It was 1931.

Two weeks later, he put the spark plugs back in and flew with Roberta to Arizona where a marriage could be arranged without a waiting period. The night before the wedding he asked how old she was. She said, “Sixteen.” He said, “You’re too young, I’m taking you back.” She refused so he married her. They stayed happily married until their deaths half a century later.

My grandpa was a stunt pilot, and he’d let Roberta fly with him when he had an open seat. One time he was flying a Tiger Moth bi-plane with cloth wings in a stunt show and asked Roberta if she wanted to go up. She was eight months pregnant with my mother. She said, “Sure!”

The plane had an open cockpit and Roberta was too pregnant to fasten the seat belt. She yelled at him not to take off, but he couldn’t hear her over the engine noise. He took off and immediately started flying upside down. My grandma fell out of the plane but was able to hold onto the ends of the seat belt. Eventually he righted the plane and she tumbled back into her seat.

He did the whole arsenal of stunt tricks; barrel-rolls and loop-the-loops. The people on the ground thought this was fantastic. They had never seen an 8-month pregnant woman coming in and out of a plane like that in a stunt show.

Less than a month later, Diane Olsen was born in 1932. Mom loved to fly and loved freedom above all. And Idyllwild was in her blood and it stayed there for her entire life.

Mom graduated from Stanford University where she met my father, Charles Robert Olsen, and agreed to marry him as long as they would never have to live in New York or Los Angeles, both cities she hated. They moved to San Francisco, but two years into their marriage my father got a research job in New York City despite his promise. Then they moved back to San Francisco again where they lived in Haight-Ashbury during the ‘60s.

In the ‘70s my father got a job he couldn’t refuse in Los Angeles. Diane said the only way she would move there was if she could buy a lot in Idyllwild. They purchased an A-frame kit to build a house. Mom escaped to Idyllwild almost every weekend and for entire summers when she could.

In 1973, my father died and my mother moved up to Idyllwild permanently. She got her master’s degree in public health at Loma Linda University by commuting up and down the mountain. Then she worked at Jurupa and Riverside Schools, again commuting on a daily basis. Her son Erik met his wife Dorothy in Idyllwild and the family connection to Idyllwild continued.

When mom retired 14 years ago, she took up volunteering at the Idyllwild Nature Center and passionately lobbied for abandoned animals, children and equal rights.

On Easter this year mom took a bad fall and hit her head. She had brain surgery, and was making an impressive recovery in the hospital, but when she got pneumonia she could see that she would no longer be able to live independently in her A-frame on the mountain. She asked to be taken off life support Friday, June 22, at 10 a.m.
As I played mom the song “I Want to be Free” by Darrell Scott, her smile was as wide as a mountain range. My mom has always loved freedom, and these last months in a hospital bed were a ball and chain to her spirit. She said that she wanted to fly. And fly she did.

My brother Jorgen and I were there. I read aloud emails, cards and texts full of love from her friends and loved ones. I had a slide show of pictures of her A-frame in Idyllwild on my computer screen and I told her to put herself there in her mind. I put Beethoven on the earphones so she would have beautiful sounds to fly away with instead of beeping machines. The whole thing took less then twenty minutes, and it was a beautiful experience to be part of.

To the very end she was completely lucid, joking, laughing and talking about politics. So it was hard to match that very sharp mind with such an ill body.

Diane was proud to be able to choose to die and said repeatedly that it is a human right worth fighting for. I can only aspire to live as fully to the end and chose to go as quickly as well.

Diane was fiercely loyal to her loved ones and to her true home in Idyllwild. One of her greatest strengths was to make the best of any situation. She loved the natural beauty of these mountains, and her friends and community brought her great joy. Diane saw people’s strengths and talents, and she enticed many of you to help out with the nature center and other cherished causes. Her passionate and generous activities will leave a lasting and positive imprint on this area.

My mom will be laid to rest in a private ceremony. The family requests donations be made to ARF (Animal Rescue Friends of Idyllwild) or the Nature Center in lieu of flowers. I would like to thank all my mom’s friends and caregivers for the tremendous love and support received these last few months.

She is survived by her son Jorgen Olsen, her daughter-in-law Dorothy, grandchildren, Karl and Katrina Olsen and me, her daughter, Kristina Olsen. Her sons Forest Olsen and Erik Olsen pre-deceased her in 1966 and 2010.