A Fire Auxiliary to assist the Idyllwild Fire Department was approved at last week’s meeting. Fire Chief Patrick Reitz told the commission, “The concept allows responders to focus on response and training. The Auxiliary focuses on the greater good of the district such as building and grounds maintenance.”

The Auxiliary, which Reitz intends to establish as a nonprofit charitable entity, could raise money for projects or activities outside the district’s budget. This also allows the Auxiliary to fund itself. He employed an auxiliary at Crooked River Ranch Rural Fire Protection District in central Oregon. The Auxiliary grew and became a model for a number of other northwestern fire departments, Reitz said.

Some of the activities and projects, which Reitz envisions the Auxiliary performing, include office support, information technology support (e.g., the website), building and grounds maintenance, business inspections, yard and lawn abatement inspections, and hosting functions at the fire station.

“It’s a way of involving the community and being the community’s fire department,” Reitz told the commission. The vote was unanimous, 4-0, with Commissioner Pete Capparelli absent.

Although the Auxiliary will not become first responders, they may be able to help the department’s firefighters during incidents, Reitz said. For example, they could refill the air bottles or check blood pressure.

Commission President Jeannine Charles-Stigall indicated that some aspects of the Auxiliary may be operational within six weeks. “This will involve the community. Nobody will be turned away,” she said. “If somebody volunteers, we’ll ask ‘What can you do?’ and find a match.” People will be qualified to conduct the work they’re assigned, she stressed.

At Saturday’s Open House, the department began collecting names of people interested in participating in the Auxiliary. Reitz requested interested individuals call the Station at (951) 659-2153 and leave their name and contact information, either a phone number or email address.

The commission also agreed to consider a program of using local resources such as water vehicles and staff for emergency incidents and even in support for responses outside the district.

The latter possibility might generate some revenue for IFPD, according to Chief Reitz.

Recently, Dan Messina, president of the IFPD volunteer company, offered to attach his water supply business to the department during incidents, Reitz told the commission. IFPD would place its name on these vehicles and equipment and enter their availability into the fire resource system.

Reitz is particularly pleased with the possibility of partnering with Messina Water since the department does not have any water tenders. Even though there are hydrants throughout Idyllwild, he said some areas near the forest would benefit from the availability of this equipment.

IFPD would train and certify any individuals involved and has received some interest from other agencies in the past month.

“I have no issue with the concept,” said Commissioner Larry Donahoo, who made the motion. The commission then voted unanimously to support the concept, but asked Reitz to place the proposed district contract on the next agenda.

In financial business, Reitz said his initial review of the budget allays some of his concerns and he believes that an advance will still be needed in the future, but the amount needed is diminishing.

The district checking account balance on Sept. 30 was $481,000, which included the $425,000 revenue advance from Riverside County.

According to Reitz, 551 properties have failed their second inspections. Since then 89 have been passed.

The volunteer company now has 16 members, according to Secretary/Treasurer Craig Scudder. Eight are responders, including four certified firefighters, three trainees and the rest are support. Equipment is available for all the firefighters.

“Not everybody has to be a firefighter or medical,” he told the commission.

In other business, the commission confirmed it plans to meet Tuesday, Oct. 23, but will skip the Nov. 13 meeting. Next month’s meeting will be Tuesday, Nov. 27 and only one meeting will be in December. 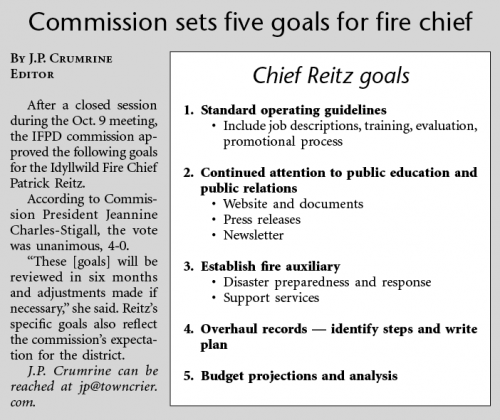