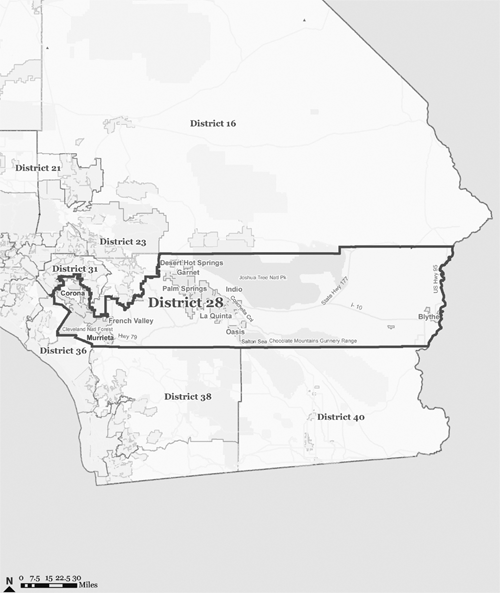 As a result of the 2010 political redistricting, Idyllwild and other Hill communities technically had no representation in the California Senate. But our former senator Bill Emmerson will continue to represent these areas until the November 2014 election.

The Hill was assigned to Senate District 28 (see accompanying map), an even-numbered district, whose residents will vote in 2014 for senator.

Prior to the redistricting, Sen. Emmerson was the senator representing the Hill from our former District 37. As an odd-numbered district, Emmerson’s term ended in November 2012 and he had to run for re-election. However, redistricting placed his residence in the new Senate District 23, which, as an odd-numbered district, voted for senator this November and Emmerson was elected.

The Hill is not the only area without senate representation until 2014. Nearly 4 million Californians were in the same situation, called “deferrals.” Consequently, the California Senate Rule Committee took action earlier this month to assign the unrepresented areas or deferrals to current senators, which is why Emmerson will continue to represent the Hill for another two years.

Emmerson will serve as vice chair of the Senate’s Budget and Fiscal Review Committee and the Business, Professions and Economic Development Committee. He was also appointed to the Senate Rules Committee, Human Services Committee, Senate Governance and Finance Committee, and Joint Legislative Budget Committee.