The contractor evaluating Riverside County’s emergency medical system is constructing several options for the county’s consideration before a new ambulance contract request is completed next year.

“Our goal is to recommend the right resources at the right time for the right patient,” said Mike Williams, president of Abaris Group, who is doing the work.

The Idyllwild Fire Protection District is unlikely to change shape because it is a protected emergency services district since service was provided here prior to the state law’s enactment in 1980.

But the county may have to decide whether to create several ambulance zones or one comprehensive zone. Also, the contractor has been looking at response times throughout the county.

Williams also discussed his findings and observations during several ride-alongs with first responders this spring. One issue that seemed to trouble him much was the time first responders had to spend at hospitals waiting for transportees to be admitted. This is referred to as “off-load delays”.

Consequently, the final report will also address recommendations to improve assessing an emergency need once a 9-1-1 call is received. This might include response time standards for non-emergency calls. Also criteria to transport some patients directly to specialty hospitals may be proposed.

The recent memorandum of understanding between IFPD and the county’s ambulance service provider, American Medical Response, has increased performance in the Mountain Plateau Zone, Williams noted. 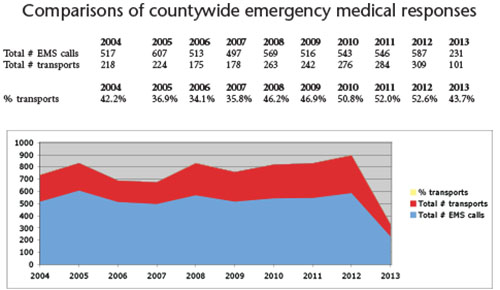