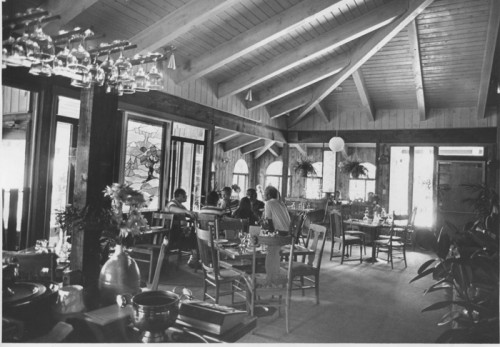 The Restaurant Gastrognome became the latest pleasure dome to open in Idyllwild in June of 1973. Located near town center, the gourmet restaurant, reminiscent of the high-ceilinged South Pacific Inn, did sell-out business on its opening weekend.
File Photo

55 years ago - 1958
Dr. Max Krone was in Germany acting as director of music for the U.S. Army schools in Germany, France and Italy.

40 years ago - 1973
Seventeen people were running for eight water board vacancies. A Town Crier editorial commended the “public-spirited citizens” for running for positions which were “unpaid, time-consuming, often thankless jobs.”
35 years ago - 1978
After a six-month search, another physician was found for the mountain area. Dr. David H. Reid of Weston, Mass., a family practitioner for more than 30 years, declared his intention to move to the Hill as soon as possible.

30 years ago - 1983
The Hemet Unified School District governing board announced it would hold meetings in the Idyllwild and Anza communities in an effort to solicit more public input on the location of a proposed mountain-area school.

25 years ago - 1988
Nearly $2 million worth of fine cars — 25 Ferraris — were in Idyllwild when members of the Ferrari Owners Club from Los Angeles stopped for lunch.

20 years ago - 1993
The Pine Cove Water District Board of Directors voted to form a lease agreement with the Idyllwild Lions Club for refurbishing the ballfields located at Dutch Flat, which were jointly owned by the Pine Cove and Idyllwild water districts. The fields had been closed down eight years previously.

15 years ago - 1998
Local fisherman “Grandpa Duncan” caught a 21-pound catfish from the shore of Lake Hemet. He was on a roll, having recently caught a 23-pounder and a 20-pounder.

1 year ago - 2012
The Idyllwild Public Library opened its new and improved renovated building that included new technology such as numerous computers.