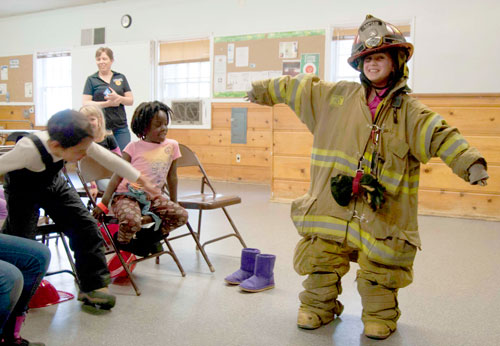 By Wendy Hawkins
Special to the Town Crier

Town Hall hosted a Spring Break festival last week, and, with the help of other local organizations, was able to provide fun events for the children of our community.

Monday, David Jerome from the Idyll Beast Research Center came to show the Town Hall kids sightings of the Idyll Beast, only to have the actual Idyll Beast appear and surprise them with “Beaster Eggs.” The Idyll Beast also brought them a treat. They were given the option of crickets — I’m guessing a favorite of his — or peanut butter ice cream. I’m sure you can guess which one was chosen.

Tuesday, the Idyllwild Fire Department gave the kids a tour of the fire trucks and ambulance. Capt. Alan Lott talked to the kids about 9-1-1 procedures, and, with the help of the Volunteer Fire Department, let the kids try on the fire safety gear. Then Susie Carlson from the U.S. Forest Service discussed fire prevention, and, with the help of Huey, introduced Smokey Bear who was met with big bear hugs from the kids.

Wednesday, Deputy Waters and Deputy Kurtz from the Riverside County Sheriff’s Department came to visit with the kids and gave them a tour of their patrol cars. They discussed with the kids the importance of “Stranger Danger” and how to call 9-11. The officers brought coloring books and sticker badges. The children asked questions and got to see all the equipment a police officer will use on patrol.

Thursday, Susan Righetti from the Idyllwild Library hosted storytime. Along with her helper, Miss LuAnn, they guided the kids in crafts like windsocks and kites. It was National Rainbow Day on April 3 so they also made rainbow-colored paper chains complete with a cloud at the end. Miss Susan also taught the kids about rain clouds and condensation with several fun stories.

Friday, we ended the week with a potluck. The families then were treated to a performance from the Town Hall’s Kids Modern Dance Class. The performed a ballet-styled number to “Somewhere Over the Rainbow.” The show starred Ruby McKellar, Ashenara Pilkington, Sammi Hoggan, Bobbi Ann Mayberry and Kylie Piche. Then the evening ended with quite the excitement. With the Easter Bunny stuck down the Hill, he called upon his special helper to save the day. The kids got pictures taken and an egg treat.