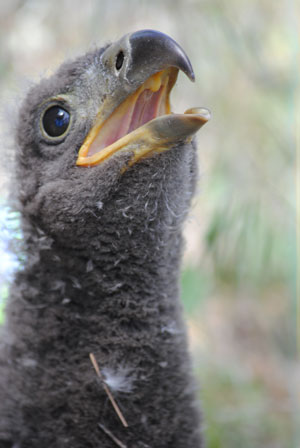 Before they fledge, fly and emigrate, Anne Poopatanapong, the wildlife biologist for the San Jacinto Ranger District, organized the banding of the two eaglets.

Papp climbed the 60 feet to the eagles’ nest near the lake and coaxed each chick to come close enough to be held and then lowered them individually to Pagel.

The birds were banded and some blood drawn for research on health and future condition if their bands were ever recovered.

In less than hour, both chicks were back home and peaceful after their first trip to earth.

Pagel and Papp determined the chicks were about four weeks old, weighed about two and a half pounds (despite their size) and were very healthy.

The current drought has had an effect of raptor breeding throughout the west, both men said. “I found many empty nests, or nests with only one or two eggs, dead youngsters or underweight chicks,” Papp said. “These two were surprisingly healthy.”

Besides fish from the lake, Pagel attributed the chicks’ good health to the parents’ ability to secure food with protein, such as ground squirrels and even ducks.

The eaglets should begin flying within a few months and, by fall, may begin their search for a permanent home outside of their parents’ nest.

These are not the first chicks born at Lake Hemet. The adult pair has been successfully breeding for nearly 10 years. However, Poopatanapong said these might be the only surviving eaglets born on the San Bernardino National Forest this year.

Two were hatched near Big Bear Lake but the late spring rain and snowstorm in early April lead to their demise, according to Robin Eliason, biologist for the SBNF Mountaintop Ranger District.