With the help of the Trust for Public Lands, the U. S. Forest Service has purchased a large piece of the Fleming Ranch in Garner Valley.

This spring the Forest Service acquired 808 acres for $2.65 million. The land is near the upper reaches of Herkey Creek watershed and includes acreage within the San Jacinto Wilderness. It is within a quarter-mile of the Pacific Crest Trail.

When more funding becomes available, the Forest Service plans to acquire the remaining 312 acres of the ranch, which the Trust owns, according to Jason Collier, biological science forester on the San Bernardino National Forest.

In addition, the house, the caretaker’s house and 160 acres are on the market for more than $3 million. These are not currently in the agency’s acquisition plans.

The Forest Service’s acquisition of the land in 2012 was delayed because funding had to be shifted to wildfire suppression activities, according to a Forest Service report released last week.

Thomas Jefferson Fleming originally bought 800 acres in 1917. Several years later, he began constructing the ranch’s structures. In the 1930s, his daughters purchased another 480 acres from a railroad, according to the broker’s history of the ranch. 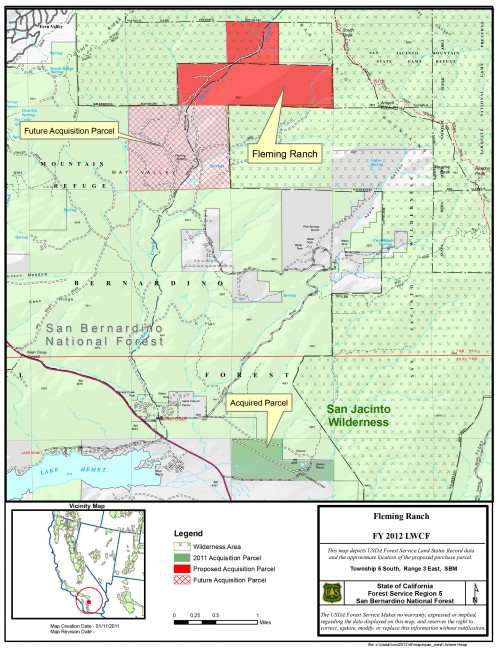