Rob Roberge writes gritty, lean and powerful prose, drawing on his own struggles with alcohol and drug addiction, and the difficulty of balancing a day-to-day grip on sobriety. Eduardo Santiago, author and founder of the Idyllwild Authors Series, will interview Roberge 3 p.m. on Sunday, July 27.

In his fourth novel, “The Cost of Living” (Other Voices, 2013), Roberge chronicles his protagonist’s seminal challenges of staying sober during and after his career as an indie rock guitarist and finding meaningful resolution to troubling family relationships that continue to haunt and hurt him.

This failure to understand and resolve deep set pain in his relationship with his father both drives and maintains protagonist Bud Barrett’s  addictive circle. “My next overdose could be my last, and I wasn’t sure I was too scared by that anymore,” said Barrett. “I’ve crossed so many ethical lines I said I would never cross in my life. I’d become a man I couldn’t recognize more times that I could ever count.”

Roberge signals, with an introductory quote from James Baldwin, how hard the struggle to reclaim lost ground is: “We are responsible for our actions, but we rarely understand them.”

Although redemption may be the goal in “The Cost of Living,” the tension in the book comes from how easily that goal is forced away by choices — repetitive negative choices — Barrett makes. Of detox, Barrett says, “The first three days of cleaning out are a pain and suffering you can’t believe are happening. And the suffering gets wrapped up in the awareness that you did this to yourself. That you’ve been doing it to yourself for years … Through all of that, you sit there, rolling on the floor, despising yourself and swearing you’ll never, never, never go through this again, no matter what.” And yet, with another choice, one more relapse, Barrett does, and the cycle continues.

Roberge, a prolific writer, has a resume which includes a story collection, two previous novels, plays and a screenplay, “Honest Pete,” made into a short film making the rounds of festivals. He just sold his first, and he said his last, memoir, “Liar,” to a major publisher.

“I’ve never written anything that challenged a form,” he said. But “Liar,” written in the second person, does. “I know of only one other memoir written in that way,” he said.

Roberge has taught as part of the UCR/Palm Desert MFA core faculty, at UCR’s main campus, at Antioch University’s MFA program and at the UCLA Extension Writer’s Program where he received the 2003 Outstanding Instructor Award in Creative Writing.

Like his protagonist in “The Cost of Living,” Roberge plays guitar, sings and does mini tours with indie band “The Urinals,” which he joined in 2006. “It’s great,” he said of his music career. “I never saw it happening. We have a new record coming out and we’ll be playing some festivals in Europe. I do it for the fun of it. I am way beyond trying to be a rock star.”

Of his writing process, Roberge said he never works from an outline. “I work from a sentence,” he said. Quoting author William H. Gass, Roberge explains, “Every sentence creates opportunities and obstacles.” “I write from language and character keeping in mind the two essential questions of readers — who do I care about [in the book] and who do they care about.”

Roberge said he then listens to his characters. “I do a lot of listening rather than trying to direct. Characters say things that surprise me and I have to move from there. I am in a state of surrender and acceptance with hope rather than expectation.”

Roberge, articulate, funny and direct in conversation, should be a provocative speaker for year four in Santiago’s series. Santiago advises, since previous events have been standing room only, to arrive early to secure good seats. 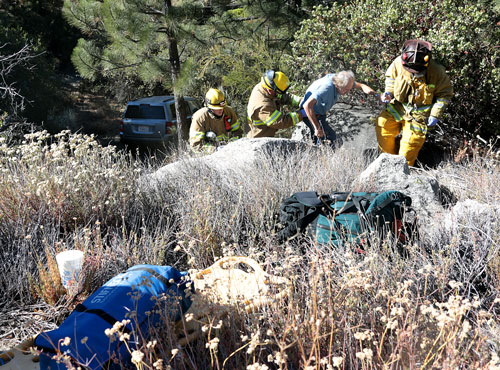