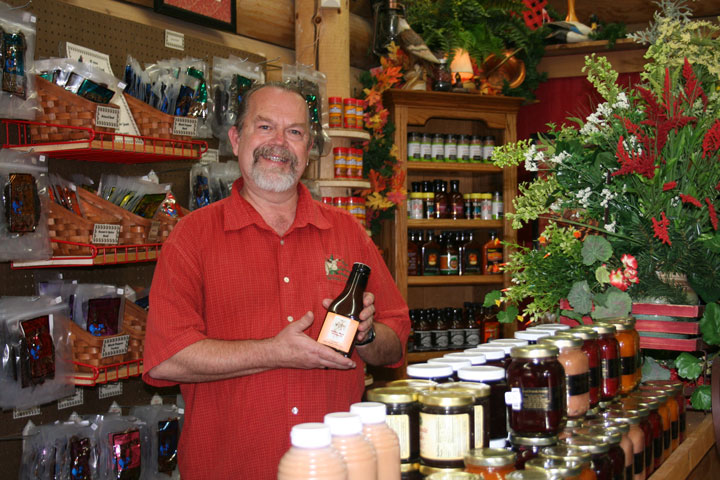 When the House of Jerky upstairs in the Fort closed last October, Bryan Tallent and John Stonitsch, owners of Spruce Moose just two doors away, saw an opportunity. Originally, Tallent said, “We took the jerky into our main store during the holidays,” and it was successful.

So on March 15, they opened Coyote Red’s in the old jerky location, a gourmet country store that still carries House of Jerky products but also carries eight citrus marmalades, jams, jellies, sauces and rubs, among many other things. Nearly 50 percent of the merchandise is from small businesses all over the country, including the Amish jams. Tallent said, “You won’t find these products anywhere else in Southern California.”

Some of the barbecue sauces are award-winning from competition entrants. “We really looked for merchandise that was unique,” Tallent said. They also carry some locals’ products: Roberto’s Jalapeño Sauce by Roberto Garcia, owner of La Casita, and several products by Fairway Foods’ Linda Higgins, including Vanilla Bourbon Apricot Jam, which Tallent said is “to die for.”

At the far left upstairs at the Fort on Park Lane, Mark Fordham and Kathy Rockwell of Vista have opened M&K Biker Shop, a motorcycle apparel shop. The shop, which opened Memorial Day, is only open weekends from 10 a.m. to 5 p.m. The rest of the week the couple travel as motorcycle vendors.

“We’re avid motorcyclists,” Rockwell said. The shop is a new venture and they searched all over, including in Julian, for a place to open. “We dearly fell in love with Idyllwild,” she said. “There was something about the town that spoke to us. And people here have been incredibly nice to us.”

Idyllwild’s newest restaurant, CJ’s Fast and Fresh Food, primarily a take-out place, opened on the Fourth of July right next to Arriba’s. Juan and Carol Garces Martinez offer American-Mexican food from 7 a.m. to 7 p.m. every day except Sunday when they close at 2:30 p.m. No alcohol is served.

They serve breakfast, including pancakes, waffles, burritos and huevos rancheros, as well as milk shakes, burgers, fruit cocktail, fish tacos and vegetarian food, and — for those reminiscing about the old Donut Cellar — donuts, too.

One menu item is the LA hot dog, a 100-percent beef dog wrapped in bacon and topped with grilled onions and jalapenos, and fresh tomatoes. Drop by and pick up a card to get the 10th item free after buying nine.

Speaking of restaurants, locals may be unhappy to hear that after nearly four years, Dan and Laura Slattery are closing Honey Bunns & Joe’s Bakery on Sept. 1, Labor Day.

The couple is moving to Murrieta. “We’ve decided it’s time for a new adventure,” said Slattery. Asked what that might be she said, “We’re not sure yet.”

And just down from the Town Crier building, Laura Posselt has opened Somewhere in Time carrying antique and vintage things, gifts and collectibles. Posselt and her husband have had a home in Idyllwild and Palm Desert for some time and opened this antique store March 1.

About 80 percent of their large item sales are to locals and she offers a 5 percent discount to locals, too.

Idyology, the restaurant that was to open in the former The Greek Place, has announced it is moving to the former Creek House.

Note: For future business news, look for a new column and send your business changes — such as new ownership, new manager, closure, etc. — to [email protected].