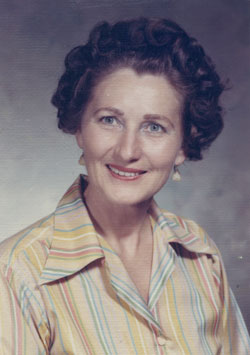 Darline passed away Tuesday, June 16, 2015. She was born July 5, 1915, in Lushton, Nebraska. Her early years were spent on a cattle ranch at the Black-hills in Wyoming. Most of her growing years were spent here in Southern California. She married Harold E. Penhalurick in 1939. They have one child, Alice P. Lindsey.

She held degrees in education, religion and the library media field, having attended Pasadena College, Maryville College in Tennessee, Whitworth College, University of Hawaii and University of Washington. She began her career teaching in Idaho and Eastern Washington. From teaching English and business education on the high school level, Ms. Penhalurick took time off to pursue a degree in the library media field.

Until she retired in 1976, she served as library media specialist in the Mercer Island School District. During this period in her career, she received several awards and honors, including the Grolier Scholarship of Librarianship, HEW Award, Institute on Asian Studies and a scholarship for the Institute for Library Analyses and Design. Following retirement, she was given the Pacesetters League Award by the Washington Association of Educational Communications and Technology.

As a reward for her association with the World Affairs Council of Seattle and her innovative ideas and practices in the library media field, Ms. Penhalurick was given a 10-month sabbatical to make a goodwill tour around the world, visiting and lecturing in 10 countries.

While living in Washington, she would vacation in Pacific Beach, Washington. Upon retirement in 1978, she was asked to write articles for a publication entitled “The Beach Guide.” Having a deep rapport and love for the ocean, she then wrote “The Sea and Me.”

In the 1980s, she and her husband, Dr. Harold Penhalurick, retired synod executive for the Presbyterian Church, U.S.A., would “snowbird” to Golden Village in Hemet. They later moved to The Village. While there, she continued her love of painting. She had several art shows in Hemet.

In 1989, she and Harold bought a home in Idyllwild. She loved watching the seasonal changes the mountain presented. Gathering her thoughts about her observations, she wrote “The Mountain and Me” in 2006.

Memorial services will be held at 11 a.m. Saturday, July 18, at the Community Presbyterian Church. Reception will follow.