Depleting their treasury by nearly half, the Pine Cove Property Owners Association handed out more than $7,000 to nearly a dozen local organizations on Saturday.

Both the Idyllwild HELP Center and the Idyllwild Area Historical Society were beneficiaries of $1,000 checks. (See the accompanying list for the complete list of awards.)

American Medical Response, the new ambulance provider to the Pine Cove neighborhood, sent two officials to formally introduce the crews and company to the community at the PCPOA meeting. 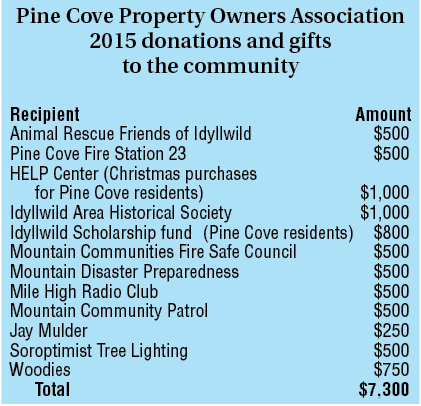 AMR General Manager for Riverside County Douglas Key stressed that the company “… wants to be more than just an ambulance company.”

He described the plans to implement a Community Health program. He encouraged residents to register with the program. Besides names, they will collect medical treatments and health status, and drop by homes on a weekly basis when needed, such as to administer blood sugar tests or other check-ups.

“We hope you never have to use the ambulance,” he concluded.

During the first week of service, AMR only had a couple of calls, according to Jack Hansen, operations manager. He assured the group that when the ambulance does transport a patient to a hospital, the arrangements for back-up service exist and AMR is committed to full protection of the residents.

After the meeting, AMR had an open house at the Pine Cove Water District conference room, where they took blood pressure readings and introduced the crews to the community.