Since the June primary, Democrats have increased their supporters by 52,000 voters (15 percent) to take a lead. Republicans have recorded an increase of 20,000 voters or 5 percent during the same period.

On May 23, there were 10,000 more registered Republicans than Democrats in the county. Five months later, after a summer of Donald Trump’s campaigning, there are 22,000 more Democratic voters than Republican.

The American Independent Party, while significantly smaller than the two major political parties, experienced a 16-percent increase to nearly 32,000 supporters.

Of the more than 1 million registered voters in Riverside County, almost 75 percent (726,039) have requested vote-by-mail ballots. As of the morning of election day, 45 percent (332,288) had already been returned.

Turnout appears to be high throughout the country, including Idyllwild. When the Town Hall precinct opened at 7 a.m., almost 25 voters were waiting to cast a ballot or submit one. The precinct captain acknowledged this appears to be the most voters this early in the past 10 years.

Statewide, the total number of registered voters for the presidential election is 19.4 million, a 1.4 million (8 percent) voter increase since the primary election in early June. 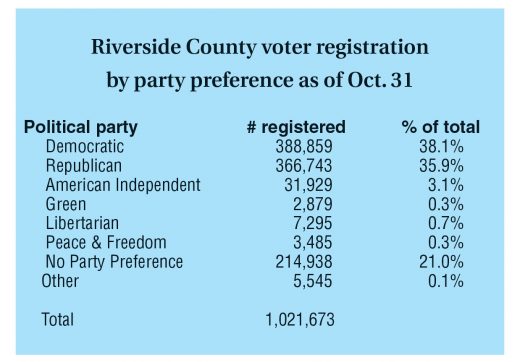