The Mountain Area Safety Taskforce prepares, as it does each year, to be fully staffed and ready for the challenges of fire season — a season that is lengthening each year and fueled this year by heavier precipitation.

MAST is a multiagency taskforce organized to cooperate in fire response, educate the public about abatement and work together strategically to prevent wildfires.

Part of that strategy is meeting on a regular basis on the Hill to receive project reports and updates.

Hill residents were urged to have checklists for defensible space to update as the fire season progresses. For example, abating one’s property early in the year raises the possibility of needing to remove more grass growth as the summer progresses.

Pine Cove Water District General Manager Jerry Holldber concurred. In speaking to FSC Executive Director Edwina Scott, he said, “The thank yous go to you and Pat for helping to keep the community safe.” Scott demurred. “The thanks go to all in the trenches who keep this mountain safe,” she said.

Idyllwild Fire Protection District Chief Patrick Reitz announced there was a 30-percent rate fail for first-round abatement notices and that second-round notices went out on June 1.

The next MAST meeting is scheduled for 1:30 p.m. Wednesday, Sept. 13, at the Nature Center. 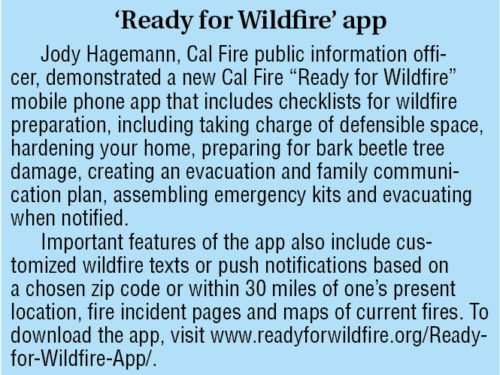