The future may be uncertain, but the past was clearly visible at Thursday evening’s Mountain Disaster Preparedness meeting. Alex Tardy, warning coordination meteorologist at the National Weather Service’s San Diego office, described several recent weather events, such as the drought, the summer and winter temperatures, and rainfall, with superlatives — “driest, wettest, longest.”

He said without hesitation, “Things are extreme and out of whack. The trend is not our friend. Expect more extreme events — drier “dry” and wetter “wet.”

Nevertheless, when asked what kind of weather we should expect this winter, “I have no ‘frickin’ idea,” Tardy admitted succinctly.

MDP President Mike Feyder opened the session with his question about “the dry El Niño in 2015-16 and the wet La Niña in 2016-17.” But Tardy, with his maps and graphs, showed that those observations were both wrong and right.

A slight alteration in the jet stream two years ago sent most of the Pineapple Express storms to the north. “The atmosphere was angry and tried to make up for five years in one. And it almost did here and did in Northern California,” he said.

Seattle experienced its greatest rain ever that winter, according to Tardy. And this past winter, Southern California received as much total rain as it had for the previous three years together.

“From October [2016] to February 2017, for California, the average rainfall was 28 inches. That is the wettest ever,” Tardy said. “The Sierra Nevada area had 160 inches of rain and snow — more than twice the average.”

Meanwhile, in the past five years, Southern California has been experiencing both the driest period on record and the warmest years. Yet, the two wettest years were the ones that were supposed to be La Niñas — 2010-11 and 2016-17. Well more than 30 inches of rain fell in Idyllwild both years. (See accompanying table.)

The same was true in Riverside, Redlands and Big Bear, not just the microclimate of Idyllwild, according to Tardy.

“The drought was completely reversed in one winter,” Tardy stated. But it left a memory with millions of dead trees throughout California, he added.

And the extremes continue unabated. Tardy showed that the average temperatures between June and July 2017 were “the warmest time ever seen.” There were 15 to 20 days with temperatures above 90 degrees. That is 6 to 8 degrees above normal, he added, “The all-time warmest period.”

“This was an unknown heat wave,” he said. “Palm Springs recorded four days when the temperature reached 122 degrees.” Even the low temperatures have been above normal. 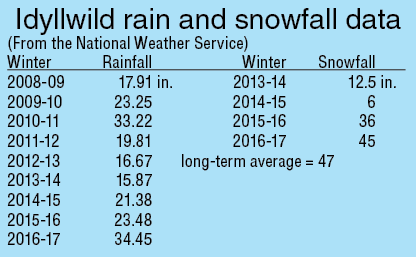 Then he addressed some of the audience’s concern that winter would bring snow and more visitors. While Tardy said snowfalls won’t stop, “it will be difficult for snow to keep on the ground. It will melt quicker.”

The average overnight winter low temperature was 35 degrees in 1950. “It keeps increasing,” he said. “Now it is about 40 degrees. In 60 years, the increase in the average low temp has been about 5-and-a-half degrees. The atmosphere is warmer. Winter will be shorter and warmer. It still may snow, but harder for snow to stay.”

“The temperatures, humidity, lack of snow are dangerous. They go hand in hand to make each other worse,” he concluded. “It’s like we’re making this stuff up. But four Category 5 hurricanes in one season, I don’t know what it will bring us. It’ll rain some, but look for more extremes.”

Forecasting three to five days in advance is possible and accurate, but three months out is increasingly difficult, according to Tardy.