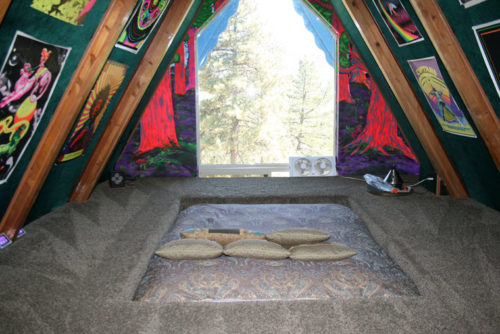 “Come with me and you’ll be in a world of pure imagination” (From Willy Wonka and the Chocolate Factory, music and lyrics by Leslie Bricusse and Anthony Newley)

Like a real-life Willy Wonka, Hollywood writer, actor, producer, DJ, movie and music video director Morgan Higby Night has created a life that is built around the elements of color and fun that have influenced his childhood and young-adult years.

From Disneyland to John Waters to Dolly Parton to burlesque to Cheech and Chong, there are larger-than-life influences and cultural icons that Night continues to celebrate.

In whatever business venture draws his attention, there is a core of pure imagination and fun. His career has been colorful. He started his career at 19 as a DJ. At 27, he wrote, produced, directed and acted in his first feature film “Matters of Consequence” in 1999 and won the Movie Magazine Breakthrough Award. At 29, he owned a night club in New Orleans in the heart

of the French Quarter, the Shim Sham Club, that produced and hosted one of the first burlesque revival troupes, with a live house band.

Born and still resident in Los Angeles, he first came to Idyllwild for the film festival to support a friend’s film being screened. Like many, he immediately was drawn to the culture and ambience of the town. “Probably like most, I picked up a real estate magazine,” he remembered. “I noticed a couple of motels for sale.” Night already had created the Hicksville Trailer Palace in Joshua Tree, the second trailer motel in the country. Night designed each trailer, not by restoring it to its original pristine identity, but by recreating each around an imaginative theme. “It was originally designed as an artists’ retreat with a recording studio and film-editing facility for musicians and artists to get work done while they were away from their regular work environment,” said Night.

“And for fun, we added in summer-camp activities — BB gun range, pool, archery, video games. We opened it to the general public in 2010. After we opened Hicksville Trailer Palace, dozens of other trailer motels opened around the country. But after visiting Idyllwild, I began to think, ‘What if I had a different Hicksville in a different climate?’”

So with a real estate brochure in hand, Night looked at several locations, including what has now become Hicksville Pines Bud and Breakfast. “It was run down, no one had been taking care of it, but it had so much potential,” he recalled. “I wanted to share my love of Idyllwild with my guests from Joshua Tree.”

And that is what has occurred. “I created this job where I get to be a full-time kid, playing with themes built around some of my cultural icons, around anything I want,” he said. “Age is nothing but a number.”

At his Joshua Tree motel, what has happened over time is that guests keep returning, not to retreat to their trailers in seclusion but to commune and hang out with like-minded people who appreciate the kitsch and the vibe.

Hicksville Pines Bud and Breakfast began as Hicksville Pines Chalets with 10 themed rooms: the Haunted Chalet, the Dolly (Dolly Parton), Mondo Trasho (John Waters tribute), the Honeymoon Suite (just as in the Poconos), Christmas Town, the Great Northern (Twin Peaks tribute), Nerds (to all things nerdy and geeky), two collaborations — Third Man Records (Nashville record store and studio) and Dita Von Teese (burlesque) — and the 420 Room (blacklight posters, vending machine and weed friendly). “Way before Prop 64, I wanted to have a room to let people know we were not your average motel,” he said. “With marijuana now legal, having a marijuana-friendly room was no different than allowing guests to bring a bottle of wine into their room.

“In my view, marijuana is far less harmful than alcohol. By making the Idyllwild motel marijuana-friendly, it creates an opportunity for like-minded people who are into kitschy things to be together.

“There is an amazing community aspect to this place. We don’t allow unregistered guests to be on the property and you meet awesome and interesting people. I feel so grateful that Hicksville has become a place of community rather than just a place for people to stay.”

On the tour for this article, Night pointed out the Hicksville Pines Wall of Fame — a place where the names of guests who have stayed in all 10 rooms will be listed. “We have one couple who are up to six rooms at this point,” said Night.

“Why make the whole place marijuana friendly?” he asked. “For me, marijuana is now legal in the state [as of Jan. 1, 2018]. People need a place where they don’t feel judged for smoking [marijuana] and can experience a sense of community.”