Riverside County is developing a vision or strategic plan to guide policy and budget issues over the next decade. Vision 2030 was initially presented to the Board of Supervisors at its Feb. 6 meeting.

His colleagues unanimously supported board Chair and 3rd District Supervisor Chuck Washington’s motion for “the next step — an integrated Strategic Plan.” County staff was directed to bring back concrete steps within 90 days.

“Each district has its unique personality. We have better outcomes combining our collaborative strengths,” he said.

Washington initiated the project last fall after attending a First Five conference and learning that nearly a third of county third graders couldn’t read at grade level. His disappointment spread when he learned of other poor results, not just educational, in the county.

He organized a staff retreat to examine what options were possible. The idea of a county strategic plan grew from that session.

“I discovered a county vision that was somewhat out-dated,” he said. He presented the idea of developing a new and current plan to County Executive Officer George Johnson, who organized his own senior county staff retreat to begin this process.

The initial results of Vision 2030 were presented last week. Overall, the senior county staff identified seven “Bold Steps,” which would be the outline and objective for the county’s future direction.

The seven steps are seen in the accompanying box.

Johnson told the board, “It’s important to have a unified vision to lead the count forward,” stressing the projections for significant population growth in the next several decades.

Washington expects and Johnson concurs that the next version will include key performance indicators to measure and designate how the county is progressing in achievement of the plan’s goals.

Budget stability and improvement remains Johnson’s key objective: “We have to have a balanced budget ongoing and ensure we have healthy resources, and we have smart resource allocations.”

“We offer 99 percent of the opportunities, but we don’t have a beach,” he noted. “But we have lots of sand in other places.”

In response, Field said, “But we also have Idyllwild, which they don’t have. So take that ‘San Diego!’”

Washington made it clear that as board chair he will push and promote this effort, but it is not his individual special project. “This is a five-year, 10-year, 2030 plan,” he stated. It will serve as guide for board decisions and county actions over the next decade, he promised. 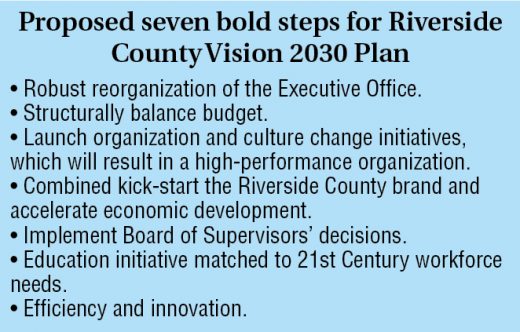