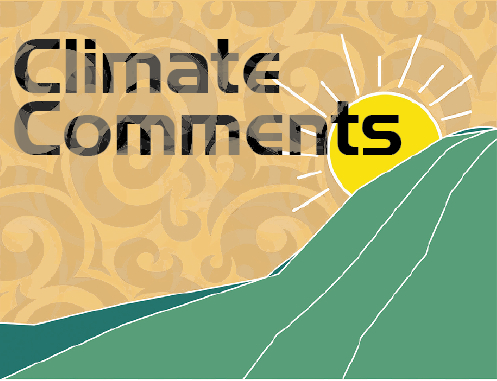 Editor’s note: This column will appear periodically and may be written by various residents.

What if instead of worrying about all the problems climate change is creating, we focused on a simple solution?

What if instead of arguing, there was a way for people from across the political spectrum to work together to empower our representatives to act?

Personally, I’m tired of worrying, and I don’t want to waste energy arguing. I just want to help solve this problem.

That’s why I was glad to learn about Citizens’ Climate Lobby. It has a legislative proposal for Carbon Fee and Dividend, and a proven methodology for working with Congress. CCL has also created the bipartisan Climate Solutions Caucus, with 36 Republicans and 36 Democrats joining so far.

Idyllwild is in the 36th Congressional District, which also covers Hemet and the desert communities. Our congressman, Dr. Raul Ruiz, has not joined the CSC yet —perhaps because there hasn’t been a CCL chapter in his district to ask him. That’s where we come in. Together, we will work to show Rep. Ruiz that his constituents support him in making climate change solutions a priority.

Why Carbon Fee and Dividend?

A carbon fee would be imposed on producers and importers of carbon-based fuel. The fee starts very low and then gradually increases. One-hundred percent of the fee (the dividend) will be returned to each household in America. This plan is simple and inexpensive to implement.

Yes, carbon producers will raise their prices, but your dividend will offset the higher prices. Low consumers of carbon can even come out ahead. According to a study by Regional Economic Models, this system would enable us to reduce carbon emissions to 50 percent below 2012 levels over the first 20 years, and would have strong positive effects on the nation’s economy and health.

Other benefits of Carbon Fee and Dividend:

• Gradually increasing carbon prices will encourage people to produce and use more clean energy. In turn, clean energy will become cheaper as it is mass-produced, giving our society a gentle way to phase out carbon fuels.

• It will decrease our dependence on foreign oil, substituting low-carbon energy made in the U.S., and create an estimated 2.8 million jobs.

• It will increase our national security. Much of our military budget is spent protecting the free flow of oil, and many lives are lost in the process.

• The transition to clean energy will give us cleaner air and water, saving an estimated 230,000 premature deaths due to the effects of pollution over the first 20 years.

We invite you to join us at the first monthly meeting of the Idyllwild Chapter of Citizen’s Climate Lobby from 10 a.m. to noon Saturday, April 14, at the Idyllwild Library. Snacks will be served.

If you plan to come or just want to learn more, contact me at [email protected] or 619-606-6419. CCL also has a weekly online info session you can join live, or watch as a pre-recorded video at https://citizensclimatelobby.org/join-weekly-intro-call.

Melanie Lamaga has a Bachelor of Science in Photography from the University of Maryland at Baltimore County, and a Master of Fine Arts in Creative Writing from Virginia Commonwealth University.