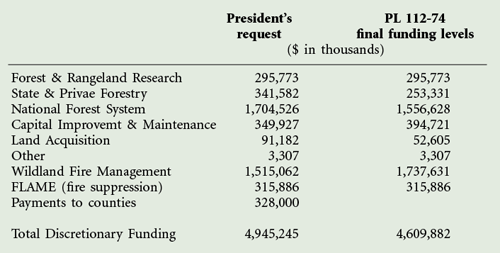 Congress passed the appropriations bill on Dec. 17. Six days later, on Dec. 23, the President signed it.

Although funding for the Forest Service’s Wildland Fire Management was increased, overall Congress provided less money for the agency than the President requested last February. The $4.6 billion appropriation is almost $90 million less than t he fiscal year 2011 appropriation.

Management of the National Forest Service was reduced nearly $150 million and state and private forestry programs were also reduced about $90 million from the President’s recommendation and $24 million below the 2011 funding level.

But appropriators supported the Wildland Fire Management and the special “FLAME” accounts. In addition to the new authorization, congressional appropriators authorized an additional $240 million that was unexpended in 2011.

The conference report directed the Forest Service to complete a plan to replace its fleet of air tankers “as soon as possible.” The conferees expressed frustration with the continual submission of studies in lieu of action and specifically objected to the ”complete lack of substantive progress this year.”

However the overall funding level allocated to specific forests has not yet been determined. But over the past several years, the San Bernardino share of hazardous fuels funding has fallen from nearly $35 million to under $2 million.

Apparently, Congress was disappointed with the allocation of these funds because they directed the Forest Service to “remove the requirement that 75 percent of hazardous fuels funding be spent in the Wildland Urban interface.”

Another provision of the bill regarding the public’s right to appeal Forest Service land management decisions has raised the ire of the Center for Biological Diversity (CBD).

The law also eliminates the public’s ability to administratively appeal Forest Service management decisions, according to the CBD. “The change, which applies to all management actions across the 193-million-acre national forest system, will diminish opportunities for the public to weigh in on timber sales, oil and gas leasing and other activities affecting forests, recreation, wildlife and pristine landscapes. Instead, it leaves litigation as the public’s only recourse against illegal Forest Service decisions.

“The bill replaces administrative appeals with a Bush-era “pre-decisional” objection process that only allows the public to “object” to management proposals before they’ve been finalized. The bill also reduces the amount of time (from 45 to 30 days) that the public has to respond to specific proposals. In addition, it includes a clause allowing the Forest Service to bypass even the pre-decisional objection processes whenever it determines that emergency circumstances exist,” wrote the CBD in a Dec. 22 press release.