It worked and it worked very well, according to attending patrons and filmmakers. The third iteration of the Idyllwild International Festival of Cinema (IIFC) improved on all fronts – quality of films shown, on-time screenings, numbers of tickets sold, numbers of attendees at festival events, screenings, seminars and ceremonies, and the participation and support of local restaurants and inns. The addition of the new Rainbow Inn screening venue and the Quiet Creek Living Room Gallery gathering and hospitality site were also well-received.

But mostly, as Rustic Theatre owner Shane Stewart acknowledged, the reason for the smooth operation and festival success was, “We knew what we were doing.” And that showed throughout the town.

Stewart’s Lumber Mill stayed open until 2 a.m. and was packed on Friday and Saturday nights. The opening night party, hosted at Creekstone Inn, and catered by local restaurants, was standing room only, with attendance estimated at 160.

“And there was food until 10 p.m.,” said Lori Gillett, Creekstone Inn manager. She credited its success to the incredible spread from local restaurants and Idyll Awhile and Baily’s Vineyards and Winery of Temecula’s wine service. 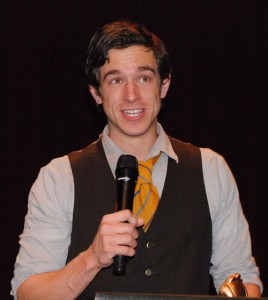 Festival Chairman Phil Calderone said, “I was particularly impressed by the participation of the local restaurants in the opening night networking party. The food tables were beautifully presented, many had their chefs present in uniform, everyone smiling and friendly. It literally couldn’t have been better. The lodges in town were of huge importance too. We couldn’t have pulled off this feat without their generosity.”

Third time festival attendees Valerie Nemeth and Gary Loomis from San Diego were effusive in comments about the festival’s growth and improvement. “The [opening night] party was so much better than last year, the food was great,” said Nemeth. “And the films are markedly better.”

“The Selling” earned the biggest buzz on the street for any film and on Sunday when the festival’s awards were given out, “The Selling” took home the most Coyote Claws (the award) for a feature: three, for Best Feature, Best Actor Gabriel Diani (who also wrote the screenplay) and Best Director Emily Lou. 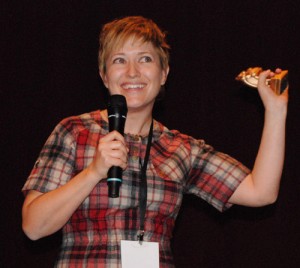 Other films audience members found of solid script and cinematic quality were “Bosco’s Guitar,” which won Best Featurette, and “Moving Day,” which won Best Cinematography for a Short Film. There was no upset this year, as there was last, over award recipients, with audience and filmmakers seemingly united in appreciation of the acknowledgments.

Calderone, who was largely responsible for film selection and festival logistics, was happy with the outcome, especially when it came to reviews for Idyllwild. “I’m hearing just what I wanted to hear,” he said. “What a wonderful friendly town and festival.”

He said that ticket sales were enough to qualify for a formal submission process next year. Preliminary ticket sale tallies, according to Calderone, showed 352 full or day passes and 198 single show passes. “I think it’s safe to say that the event attracted about 500 people. As to local versus off-the-Hill individual attendees, that’s harder to get exactly, but it looks like about 200 local and 300 off-the-Hill,” he said.


Also noteworthy were film presenters at each venue, and question and answer segments at which talented filmmakers discussed their process.

Scheduling seminars at the Rustic was also a plus. The “From Screenplay to Screen” seminar featured a powerhouse panel of pedigreed filmmakers, distributors and innovators who discussed the transition to digital and the new landscape that has created.


The Rustic was filled with interested young filmmakers. Osiris Entertainment’s Evan Crooke noted how much technology has made filmmaking easier. But the result, in his opinion, has downgraded the overall quality of available product. Featured Filmmaker Alan J. Levi countered, “Today’s technology allows each of you to go out and do it. It’s amazing what new filmmakers are doing for practically nothing.”

At the end of the festival, with many of the films having been made on a shoestring, what was screened at IIFC 2012 seemed to support Levi’s point of view — that quality could be produced on a small but carefully managed budget.

Both attendees and filmmakers agreed the Idyllwild festival has grown up and will go on, much stronger and with a greater commitment to programming quality fare at ticket prices that locals truly appreciate.

“The quality was so much better,” said third year local patron Nancy Borchers. “And it was a great value.” Borchers and crew saw more than 30 films each.

Audience Choice
“Life At the Resort”

Best Actor, Male, in a Feature or Featurette
Gabriel Diani, “The Selling”

Best Actor, Female, in a Feature or Featurette
Moniqua Plante, “Buttons In the Ground”

Best Actor, Female, in a Short Film
Kerry Garvin, “A Cube and a Button”