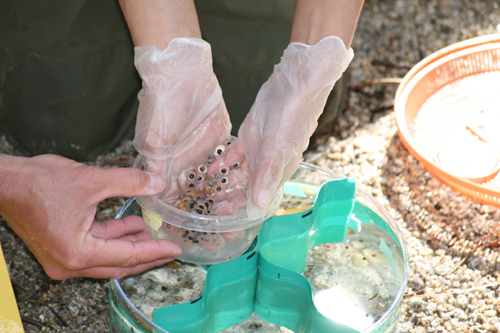 The Mountain Yellow-legged Frog (MYLF) is now an official California endangered species. The state’s Fish and Game Commission made the unanimous decision Friday.

The action was the result of a January 2010 petition from the Center for Biological Diversity (CBD) requesting the commission to list the frog as endangered.

“The listing just emphasizes the critical state of this species,” said Adam R. Backlin, a U.S. Geological Survey ecologist with the Western Ecological Research Center. “The next steps are to continue efforts to stabilize and increase current populations and work toward establishing new populations within the historic range of the frogs.”


Actually there are two distinct MYLF populations — northern and southern frogs. The northern frogs are in the Sierras. The southern MYLF habitat stretches from the San Gabriel Mountains east to the San Bernardino and San Jacinto mountains. This population already was designated as endangered. The U.S. Fish and Wildlife Service issued a ruling in August 2002 making this determination. Four years later, the FWS designated critical habitat for the MYLF.

Consequently the state designation will have a more important effect on the northern population of the frog, although both populations have continued to experience declines. The Southern population has lost nearly 81 percent of its habitat sites in the past 15 years, according to a California Department of Fish and Game report submitted to the commission.

“The state listing doesn’t anticipate much for the southern MYLF,” said Mitch Lockhart, an environmental scientist with the California Department of Fish and Game. “It will be another layer of regulatory administration.”

But restoration efforts have already begun in the area. The San Diego Zoo, in conjunction with USGS biologists, has bred the frog in laboratories and released the eggs in Indian Creek on the San Jacinto Mountain. The first release took place in 2010.

According to reports on the the James Reserve website, tadpoles were observed during each 2011 survey and officals are optimistic about the release efforts in 2012.

“We have detected tadpoles at our release site as recently as January 2012 and have plans to revisit the site in February,” said Backlin. “We are hoping these tadpoles survive the winter and morph into frogs in the summer or fall of 2012. We are planning additional releases at the same site in 2012.”

In addition to loss of habitat, MYLF populations have suffered from introduction of non-native trout into their streams. The state Fish and Game Department has already revised its stocking plans to account for the frogs’ habitat. Disease and habitat loss are other major reasons for the decline in the species’ numbers.

In addition, wild fires and firefighting techniques can disturb and potentially destroy the frog’s habitat. Fires and significant use of water from streams and ponds to fight fires, which depletes the streams or ponds where the frogs live, can change the amphibians’ habitat.

“[The designation] might affect firefighting, but I’m not sure of the full answer,” Lockhart said. “I do know there are concerns about firefighting practices when they overlap with existing frog populations.”

“It’s a giant step,” said Jeff Mill of the CBD, one of the petitioners. “Taking out exotic trout and getting rid of pollutants to restore mountain yellow-legged frogs will have ripple effects beyond these species — it’ll help to heal some of the damaged high-elevation habitats of the Sierras and Southern California mountains.”