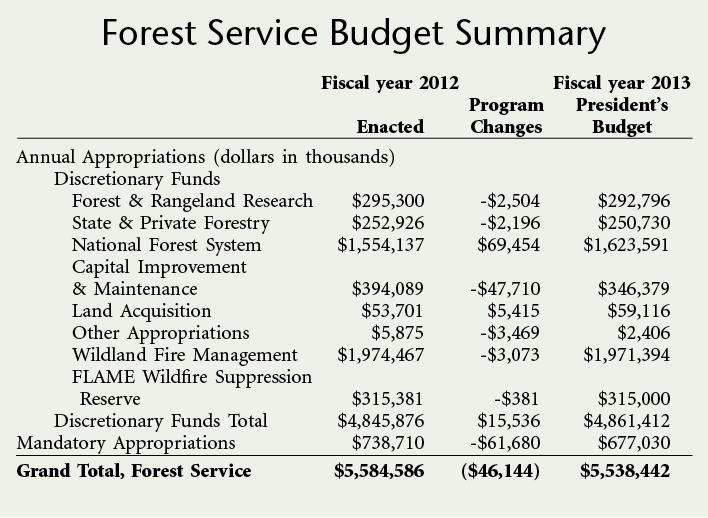 President Barack Obama released his proposed 2012-13 budget on Feb. 13. If Congress approves the President’s recommendation, the budget would have a $900 billion deficit, about two-thirds of the projected 2011-12 $1.3 trillion deficit.

“To make the strategic investments to grow the economy and tackle the deficit, this budget makes difficult cuts to programs — but our priorities are designed to respond to the needs of the American public,” Tidwell said.

“The budget request will engage communities and help Americans reconnect to the outdoors, expand on recreation benefits and create a wide range of opportunities for economic expansion to retain and create jobs. It also fosters partnering with communities and cooperating agencies to reduce the threat of wildland fires to people, property and watersheds.”

Except for the National Forest System and land acquisition accounts, all other Forest Service programs were cut, including the Wildland Fire Management programs (-$3.1 million).

The fire management reduction is misleading because nearly $90 million for hazardous fuels and forest health management of federal lands was transferred to funding for Integrated Resource Restoration, which combines funding from several formerly separate activities into a newly organized program. In Fiscal year 2012, the Forest Service conducted a pilot effort in three different regions.

The intent is to combine separate activities that all affect the forest landscape in order to assess and implement the most appropriate actions for whole forest ecosystem management.

“By making targeted investments in the landscapes most at risk, we can restore healthy, resilient forests and grasslands, provide recreational and hunting access, and provide forest products for the benefit of all Americans,” Tidwell said. “Our fiscal year 2013 budget request is designed to do just that by working with partners across borders and boundaries at a landscape level.

“Based on our current efforts, we know that increasing collaboration with local communities can move conservation efforts from a scale of thousands of acres to hundreds of thousands of acres. The President’s fiscal year 2013 budget strategically allocates resources to support exemplary local stewardship and collaboration models and to catalyze new partnerships and innovations.”

As the hearing began, Subcommitee Chair Mike Simpson, R-Idaho, advised Tidwell that the Integrated Resource Restoration program is only beginning its pilot stage this fiscal year. “Before we can allow IRR to be employed nation-wide we need proof of concept and robust performance measures to know that it works. The fiscal year 2012 bill was just completed, so I realize you haven’t had sufficient time to implement the pilot,” Simpson said to Tidwell. “Nonetheless, we look forward to seeing real, tangible accomplishments in the near future.”

There is a planned $100 million reduction in general costs over the course of fiscal year 2013 and fiscal year 2014. Tidwell estimated that his agency’s workforce will be reduced by nearly 1,500 full-time equivalents between fiscal year 2011 and fiscal year 2013, a reduction within its average annual attrition rate. He also identified reduced spending levels in travel, information technology, printing, vehicles and promotional items.

The suppression activity within fire management is increased $78 million and the recommendation for state fire assistance funding is $17 million greater than the 2012 appropriation. Consequently the entire Wild Fire Management program is only $3 million less than this year.

The Forest Service is not planning on any staffing changes or reduction of major equipment available for fire fighting. Just last month, the agency released a request for proposals for the next generation of fire fighting aircraft.

The strategy is to replace the fleet of aging air tankers used to battle wildfires with a next generation of newer, faster, more cost-effective large air tankers. Simpson supported the Forest Service’s strategy to replace the aging fleet, but asked the agency head to work closely with the subcommittee on funding issues.

“We need a core fleet of the next generation large air tankers to supplement our boots-on-the-ground firefighters for what we know will be longer and more severe wildfire seasons in years to come,” said Tidwell. “The effectiveness of air tankers on a wildfire is directly proportional to [their] speed and load capacity. A larger load capacity also allows larger air tankers to split their retardant loads to support different parts of a fire without delay of returning to base.”

Although no large air tanker has been built specifically for firefighting, several aircraft were designed to handle similar stresses. Recommendations for the next generation of air tankers include capacity to carry 1,800 to 3,000 gallons of mixed retardant; a minimum cruise speed of 345 mph; powered by turbine engines, which are more reliable, more fuel efficient, and require less maintenance than older aircraft piston engines; able to operate from most federal air tanker bases.