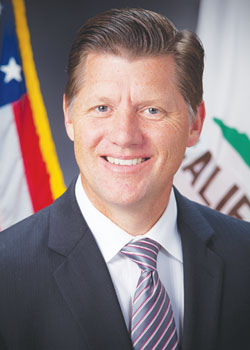 The 2011 statewide redistricting has placed Idyllwild in a new Assembly District for the 2012 elections. Brian Nestande (R-Palm Desert), the current Assembly District 64 incumbent, represents the Hill in the state Assembly until December 2012, after which he will no longer represent the Hill.

Idyllwild and the other local communities from Poppet Flat to the San Diego border are part of new Assembly District 71, which extends south to the Mexican border. Brian Jones (R-Santee), Assembly District 77, is the current incumbent.

Jones is finishing his first Assembly term. He served on the Santee City Council from 2002 until his 2010 Assembly victory.

This year’s open primary assures Jones will likely face either Patrick Hurley, a Democrat, or John McLaughlin, a Republican, in the November election. But neither has raised the campaign money Jones has collected.

“I certainly don’t take this race for granted,” Jones said. “I’ll run the same campaign in the primary as I will in the general election.

“It’s my responsibility every two years to connect with public,” he said. “I have to re-apply for my job.”

When asked if he found it frustrating to be a Republican and constant minority member of the legislature, Jones replied that without the minority, California would have seen $55 billion of new taxes imposed in the past two years.

“I’ll stand against increasing our taxes,” he said emphatically.

What frustration exists, he invests in his responsibility to recruit new Republican candidates throughout the state. “Currently there are 27 Republicans in the Assembly,” he said. “My goal is to get that to 30 or 32 after November. And I’m absolutely optimistic.”

The current projected $16 billion budget deficit has made Brown a terror on taxes, according to Jones.

Jones is planning to visit Idyllwild during June.