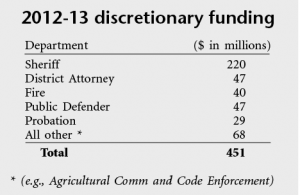 County supervisors held hearings for the 2012-13 budget on Monday. County Executive Jay Orr has proposed a balanced budget without relying on any reserves.

However, the County’s financial condition continues to deteriorate. Orr avoided $40 million of reductions because of carryover from this year into the next fiscal year.

“At the beginning of the budget process, my office anticipated a structural deficit of $80 million,” Orr wrote in his memorandum to the board. “The result is a balanced budget, built on conservative principles and personnel reductions that are expected to exceed 200 employees. Those plans … will be implemented by July 1, 2012. Service impacts are unavoidable but manageable.”

The executive is proposing to restructure the county’s Community Health Agency and the Transportation Land Management Agency. Orr told the board that more organizational changes may be needed.

Revenue stability fails to appear and remains on the future horizon. The assessor will have another projection of property tax revenue for 2012-13 next month and Orr warned the board that the possibility exists of assessed valuation declining another two percent or more. If this were to occur, discretionary revenue would be at least $10 million less than the estimated $12.3 million decline already in the budget estimates, he wrote to the board.

Besides local property valuation, the county still may suffer revenue declines from unanticipated state actions. Orr described it as “effects from the state budget debacle.”

The largest share of the county’s discretionary resources (74 percent) is allocated to public protection ($451 million). The Sheriff’s Department will receive almost $220 million.

The $219.6 million for RCSD is $20.7 million less than Sheriff Stan Sniff requested for 2012-13. While some additional revenue has developed, Sniff told the board that without changes he would be $6.2 million over budget next year.

Sniff also asked the board to increase funding for patrol staff in order to return the unincorporated staffing ratio to one deputy per thousand residents. Currently, the ratio is about .85 deputies per thousand. If the board agrees, Sniff estimates he needs 18 months to hire and train 50 more deputies before they can be on the street.

In addition he is urging the board to address the shortage of jail beds in Riverside County.

Other public safety agencies’ funding for 2012-13 includes about $47 million for the District Attorney’s Office. The Fire Department, which also receives structural fire-tax revenue, will receive about $40 million in general-fund support. As required by state law, the county plans to allocate almost $47 million to the Public Defender’s Office, the Alternate Public Defender, confidential court orders, and indigent defense.

The proposed budget does include $7 million for a contingency, which is about a third of the Board’s policy.

No ongoing general funds are appropriated in the recommended budget for new capital projects, but previously approved projects will continue.

The board will adopt a final 2012-13 budget in September.