Ken Dahleen and his Big Band Staff open the 13th season of the Idyllwild Summer Concert Series. Held at the Idyllwild Community Center site, the first concert starts at 6:30 p.m., Thursday, July 5. There is no opening act.

“Since it’s [the day after] Independence Day, we’re opening with patriotic music including the national anthem, some armed service hymns and a narrated Johnny Cash piece called ‘That Ragged Old Flag’ with a big band musical setting,” said Dahleen of the evening’s program.

The other entrees on the opening concert menu include tributes to the Tommy Dorsey and Harry James bands as well as salutes to some of the greatest big band clarinetists — Benny Goodman, Artie Shaw and Pete Fountain. BBS leader Dahleen, a clarinetist, is featured in these salutes.

“We’re bringing in two great vocalists with the band this year — Cassie Miller and Dean Lining.” Miller has toured with Andy Williams, Perry Como, the Harry James Orchestra, and Jimmy Dorsey and Tex Beneke Big Bands and was named Big Band Singer of the Year at the Los Angeles 2005 Music Awards. Lining will be making his big band debut with Dahleen and his band.

Quizzed about seating availability since the recently completed Idyllwild Community Playground abuts the stage and takes out about 300 seats, by Dahleen’s estimate, he said, “I’m not really concerned. People will relocate themselves. And besides, with the playground and the stage structure together, the site is starting to look like it’s part of something. It’s no longer just a stage in the middle of a forest.”

Each season, Dahleen and his board begin with a near $20,000 budget and very little money on hand, relying on sponsors and audience donations at each concert to fund the series that is free to the public. This year, the board has on hand about $5,300 of its $22,000 budget goal.

See www.idyllwildsummerconcerts.org for more information about the season, how to make financial contributions and how to become a series sponsor. 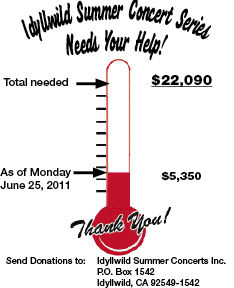