Spokesman Rick Grady, on lead vocals and harmonica, riffed on the band’s practice of bringing audience members up for some open mike sing along. “We want the audience to be part of the show,” said Grady. “We really enjoy reaching out and being in touch with the folks who come to see us.”

The United Blues Band is made up of eight veteran professional musicians shaped by playing with some of pop and R&B’s best. Now in their eighth year together, United Blues Band members are Grady, Johnny Martinez on drums, Phil Kelley on bass and vocals, Evan Brinton on trombone, Jack Poster, formerly lead trumpet with the Harry James Orchestra, on trumpet, Loren Weisbrod on sax, John Cruz on guitar and vocals and Tom Kowalzyk on keyboard.

If when you hear tunes like “The House is Rockin’,” “I Just Wanna Make Love to You,” and “You Can Leave Your Hat On,” your feet and motion master start to move, then boogie on down to United Blues Band on Thursday, Aug. 9. It’ll be your night.

Listen to some of United Blues Band’s tunes at www.myspace.com\unitedbluesband. Wth only one concert remaining on Aug. 16, producer Ken Dahleen needs audience support to make budget. As of Monday, July 30, ISCS has raised $21,053 of its total budget of $23,859.

Opening at 6:15 is local group Unwound. United Blues Band takes the stage at 7 p.m. As are all ISCS events, the concert is free to the public and is held at the site of the proposed Idyllwild Community Center. 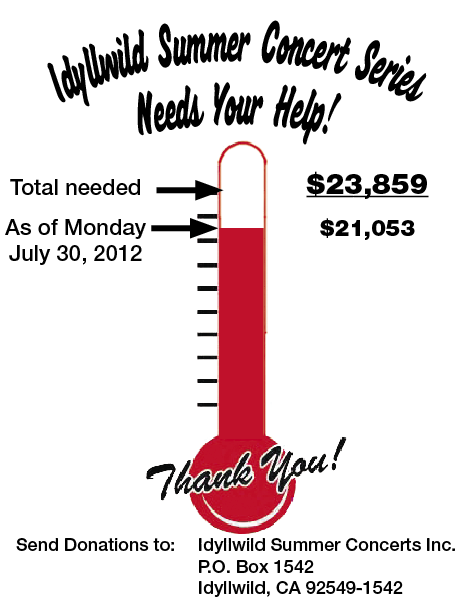