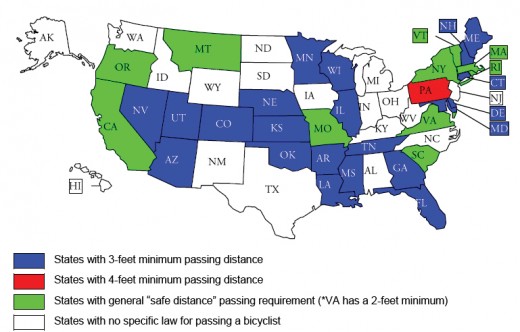 Gov. Jerry Brown signed legislation that requires vehicle drivers to overtake and to pass bicyclists at a safe distance. Assembly Bill 1371, which will become effective on Sept. 16, 2014, specifies this distance as a minimum of 3 feet.

A driver unable to provide the minimum 3-foot passing distance due to traffic or roadway conditions must slow to a reasonable and prudent speed and only pass the bicyclist if it would not endanger the bicyclist’s safety.

Violation of these provisions could result in a fine of $35. If a collision occurs between a motor vehicle and bicyclist in which the bicyclist is injured, the fine could be $220. In addition to the fine, normal court costs are associated with these infractions.

The bill’s sponsor, Assemblyman Steven Bradford (D-62), represents a portion of Los Angeles. The author and the sponsor believe this bill will help make streets safer and more user-friendly for bicyclists by removing ambiguity in current law regarding a motor vehicle’s responsibility to provide a safe passing distance for bicyclists.

California is the 21st state to adopt the “Three Feet for Safety” legislation. Among the states that have adopted similar legislation are the mountainous states of Arizona, Colorado and Utah. Pennsylvania requires vehicles to use a 4-foot passing zone. Another nine states have enacted general “safe distance” laws.

In 2011 and 2012, Brown vetoed similar legislation. The 2012 bill was vetoed because it authorized drivers to cross over double-yellow
See Bikes, pages 4
or double-white pavement markings in order to provide the minimum 3-foot clearance when overtaking a bicyclist.

In his veto message, Brown said, “Crossing a double-yellow line is an inherently dangerous act that increases the risk of head-on collisions. When a collision occurs, it will result in a lawsuit where the state is likely to be sued as a ‘deep pocket.’ By making it legal to cross a double-yellow line, the bill weakens the state’s defense to these lawsuits.”

In 2011, Brown vetoed a bill that would have established a minimum 3-foot passing distance and required vehicles to slow to 15 miles per hour when passing a bicyclist with less than 3 feet of passing distance.