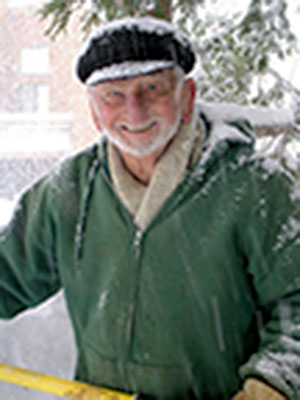 John Woolley, 94, peacefully passed away Thursday, Nov. 14, 2013, in Hemet in the company of family. He had been a familiar figure around the village of Idyllwild since 1954.

John was born in 1918 to Frank and Cassia Woolley in San Diego. Music was a big part of his life from an early age. At age 7, he joined the Barnum Brothers Boys Band and forevermore played in parades, concerts, dance bands, pipe and drum corps, and the U.S. Army band. Not a day went by that he didn’t pick up his drumsticks, even if just to practice for a few minutes.

In 1941, he enlisted in an Army anti-aircraft unit and was immediately shipped to Hawaii where he survived the Japanese attack on Pearl Harbor. He spent the next four years island-hopping in the Pacific Theater. Among other duties, he and fellow band members entertained the troops.

John loved the outdoors, spending as much time as possible outside. After shoveling his own yard, he frequently was seen shoveling snow for family and friends or making runs to the dump or post office. Over the years he spent time in Alaska and New England, but always came home to Idyllwild.

His ashes were interned at Fort Rosecrans National Cemetary in San Diego with full military honors.

Anyone wishing to make a donation in his name is encouraged to contribute to the Idyllwild HELP Center.