Perhaps complacency and youthful ignorance of the olden days, when measles was a more common illness, have combined to permit the virus to gain a new stronghold in the U.S, particularly in Ohio and California.

A record number of verified measles cases have occurred since January. The Centers for Disease Control and Prevention have confirmed 288 cases of measles in the period, the most since 1994.

“… [this] should be a wake-up call for travelers and parents to make sure vaccinations are up-to-date,” said Dr. Anne Schuchat, assistant surgeon general and director of CDC’s for immunizations and respiratory diseases. “Cases ranged in age from 2 weeks to 65 years … 18 (or 6 percent) were younger than 12 months or too young to be routinely vaccinated, [and] 48 (or 17 percent) were between 1 and 4 years of age:”

Nearly all of the measles cases this year have been associated with international travel by unvaccinated people.

“The current increase in measles cases is being driven by unvaccinated people, primarily U.S. residents, who got measles in other countries, brought the virus back to the United States and spread [it] to others in communities where many people are not vaccinated,” Schuchat said in a press release last week.  “Many of the clusters in the U.S. began following travel to the Philippines where a large outbreak has been occurring since October 2013.”

More than one in seven cases have led to hospitalization. Ninety percent of all measles cases in the United States were in people who were not vaccinated or whose vaccination status was unknown.

“We often think of measles as a childhood disease, but today’s report reminds us there are many adults who never have received the childhood vaccines,” Schuchat said.

The large number of measles cases this year stresses the importance of vaccination. Nearly 140 of the cases have occurred in Ohio and another 60 in California. It was only 15 years ago when CDC declared measles had been eliminated in the U.S; although millions of cases still occur worldwide.

“Many U.S. health-care providers have never seen or treated a patient with measles because of the nation’s robust vaccination efforts and our rapid response to outbreaks,” said Schuchat.

Patients who present with fever and rash along with cough, runny nose or pink eye should be evaluated for measles; especially, if the patient is unvaccinated and recently traveled internationally or was exposed to someone else who has measles or recently traveled.

“Timely vaccination is the best way to prevent measles,” Schuchat stressed. “The measles vaccine is very safe and effective. But only if it’s used.”

Infants and young children are at high risk of getting a serious case of measles. CDC recommends two doses of measles, mumps and rubella vaccine for everyone starting at age 12 months. For those traveling internationally, CDC recommends that all U.S. residents older than 6 months receive MMR vaccine, if needed, prior to departure. For adults born after 1957, CDC recommends one dose of MMR.

Measles is a serious respiratory disease that is highly contagious. Anyone who is not protected against the disease is at risk, especially if they travel internationally. 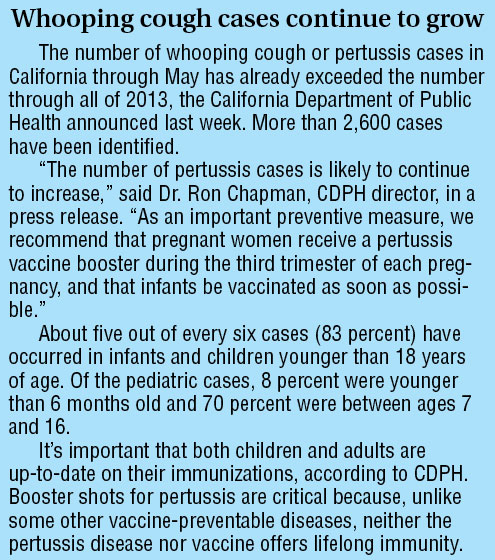