Local fire officials held their Mountain Area Safety Taskforce meeting last week, about one year after the Mountain Fire. No fires were burning on the Hill and the local agencies were working on fire prevention and protection projects in the middle of the current fire season.

Enforcement of abatement requirements on vacant lots on the Hill, a topic which was raised at the recent fire chiefs Town Hall meeting, was discussed. Riverside County Fire Chief John Hawkins announced the formation of a committee to address the issue. He plans to appoint two of his staff, two community members and also invited Idyllwild Fire Chief Patrick Reitz to join.

Riverside County Ordinance 695 requires the abatement of hazardous vegetation and can be enforced by chiefs of local fire districts. Property owners are responsible for ensuring their property is safe. If the county must abate the property, the owner is responsible for those costs.

If the owner does not pay these costs, the county has the authority to assess them against the property and collect the expenses as they would property taxes.

Hawkins said that the ordinance has only been applied on the western edge of the county and in the front country below the mountains. Further the state’s applicable Public Resource Code (4291) does not apply to vacant land.

However, with the help of Idyllwild resident Sue Nash, a former San Bernardino attorney, Cal Fire is investigating how abatement requirements are implemented there and whether this approach might work on the Hill. This will continue with the establishment of the committee.

Hawkins also suggested that a petition would be useful to secure “some SRA [State Regulatory Area] funds for that purpose.”

“There’s good compliance in Idyllwild,” Reitz said. “When necessary we bring in [Riverside County] Code Enforcement for some persistent offenders.”

The goldspotted oak borer’s presence on the Hill was also a major topic. Cal Fire Riverside County Unit Forester Greg Bratcher reported that the number of confirmed infested oak trees has now reached 40, a 25 percent increase since the middle of May. The most recently identified trees were in upper Fern Valley, he said. As of last week, Bratcher said, the GSOB has not been found within the National Forest.

He praised the Mountain Communities Fire Safe Council for its “boots on the ground inspections.”

He encouraged landowners who notice oaks with poor leafing patterns to contact the GSOB hotline. “The trees should be all leafed out, if you see questionable canopy call us,” Bratcher said. Although the drought will affect the trees’ health, Bratcher stressed the need to be sure the GSOB is not harming the trees’ health.

If a property owners suspects that an oak tree may be infected, they should first visit the University of California, Riverside’s GSOB site at http://ucanr.edu/sites/gsobinfo/ to verify the infection. Next call Cal Fire’s GSOB hotline at 951-659-8328.

The Mountain Communities Fire Safe Council Woodies crew will make a preliminary inspection of the tree. If they identify a possible GSOB presence, Bratcher and Kevin Turner, GSOB coordinator for University of California Agricultural and Natural Resources Riverside, will visit to make a positive identification.

A California Firewood Taskforce grant is being used to buy several large signs warning travels to the Hill about the GSOB. “We want to warn people about moving firewood and raise awareness that moving firewood is a bad thing,” Turner said about the signs.

The drought reduces the pines’ ability to produce sap and to protect themselves from the bark beetle. Consequently, fire officials are seeing more dead and dying pines on the Hill. In addition, Bratcher said he has found the presence of scale on several pines recently. “But it’s treatable,” he added.

“Keep your eyes on the tees and be vigilant,” he advised the group. “It’s a rough go this year and only getting worse.”

In other news, Esnard is moving the community Wildfire Protection Plan forward. He is arranging meetings with both the Forest Service staff and Cal Fire. 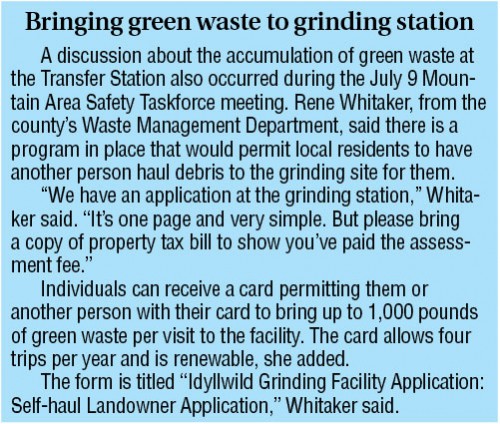