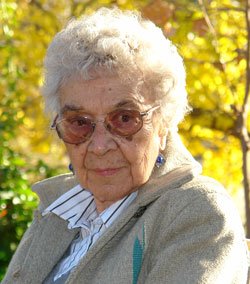 Leona McGaugh maintained a way of life more familiar to last century. She didn’t own and never used a computer. She still made her calls on a rotary telephone. She cooked meals on a wood-burning stove. But none of these facts prove she was unconnected. Owner and operator of the 130-acre Baldy Mountain Ranch near Mountain Center, Leona was a generous lady who understood how to connect with others directly with straightforward dignity.

Surrounded by her family, Leona died at home Monday, Dec. 29, the day before her 95th birthday.

Born in Whittier, California, in 1919 to John and Irene Barton, Leona Agnes grew up on the 1,200-acre Aguanga Cottonwood Ranch farmed by her father. With no electricity, no telephone, no indoor plumbing and no Scott tissue, Leona joked that she and the family were grateful for pages from the Sears and Montgomery Ward catalogues.

On weekdays she walked 1 mile to the Cottonwood School which still stands today as the oldest single-room schoolhouse in California. She later graduated from Hemet High School in 1937. One of her favorite memories to share was when the men from the CCC camps invited the country folk for movie night. She also enjoyed reminiscing about the Saturday night dances at the schoolhouse well attended by the whole family. “But it was back to work on Monday,” she would remind. “No tractors then — all horse and manpower.”

When she first met Joe McGaugh, she had a .22 on one shoulder and a dead rabbit, that night’s dinner, over the other. She and Joe would later marry in 1938 in Yuma, Arizona, and shortly move back to California to work on a ranch in Aguanga owned by actor Frank Morgan of “The Wizard of Oz” fame.

In 1944, the couple bought the Idyllwild Dairy and the town’s main market, and for nearly two decades Joe milked cows and delivered milk while Leona operated the store, now known as Village Market. As the two maintained the long hours demanded by livestock, business and the raising of two daughters, Joyce and Alma, they were also developing the property at Baldy Mountain Ranch.

Joe built the mile-and-a-half dirt McGaugh Road from Highway 74 to the ranch where the couple raised pigs and cattle and grew alfalfa. Eventually Joe and Leona opened campsites and founded a picturesque mobile home park. When Joe died in 1986, Leona continued to operate and develop this beautiful place, which remains the most enduring piece of her legacy. Those who live on and visit Baldy Mountain Ranch will deeply miss the warmth, humor and down-to-earth insight of its grand lady.

Leona is survived by her daughters, three grandchildren and four great-grandchildren. Services will be at 10 a.m. Thursday, Jan. 8, at the San Jacinto Valley Cemetery where she will be laid to rest with her beloved husband, Joe.

Leona McGaugh gave generously to many charities serving veterans, Native Americans, orphans, the homeless and those suffering from disease. In lieu of flowers, those wishing to honor her memory should send donations to whomever they see most in need.