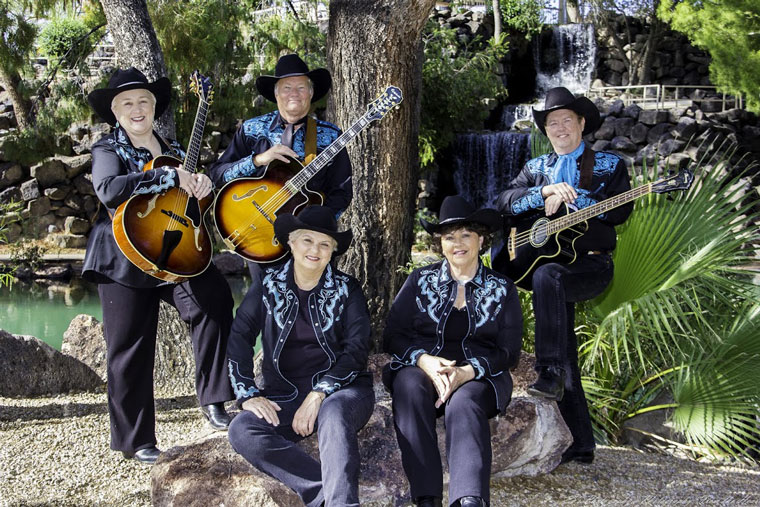 The Red Hot Rhythm Rustlers, Arizona imports, are award-winning practitioners of Western music — the music of the American West, composed by and about the people who worked and settled the western United States and Canada.

The five-piece group appears next, Thursday, July 23, for Ken Dahleen’s Idyllwild Summer Concert Series. Directly related musically to English, Scottish and Irish folk ballads, Western music celebrates life on the open range — the loneliness, the beauty, the challenges, the freedom and the heartaches.

Named 2012 Western Music Group of the Year by the Western Music Association, the Rustlers are led by songwriter, vocalist and bass player Marvin O’Dell. O’Dell, a retired Baptist minister, stressed their evening of everything from cowboy classics and Western swing to cowboy gospel and patriotic tributes will be family friendly. In honor of Herb Jeffries, the band will perform O’Dell’s tribute to Jeffries, “The Bronze Buckaroo.” “He had wanted to record with us, but his health was failing and it didn’t work out,” remembered O’Dell.

Reflecting the genesis of Western music and the ranch houses where the music was originally performed, the Rhythm Rustlers are a string band, with strong vocal harmonies. Joining O’Dell are Jean Sudbury on fiddle, award-winning guitarist and vocalist Dan McCorison, with Gale Rogers and Audrey Pett joining on vocals.

O’Dell said the Rustlers would keep the tempos lively and throw in an occasional cowboy waltz for those whose tastes run to sweet and sentimental. Otto Gray, an early cowboy band leader, believed all Western music tempos came from the gait of a cowpony — a walk, a trot or a lope — and that the richly harmonious singing also was very improvisational, reflecting the freedom of the open range.

So if your ears and hearts hanker for cowboy sentiment found in standards like “Cool Water,” “Back in the Saddle Again,” “Red River Valley” and “Ghost Riders in the Sky,” put your arm around your fellow or gal, break open a beverage and reminisce about those days and nights spent among the tumbleweeds, cacti and cattle — in a time when things were simpler and sweeter.

On the other hand, if dancin’ is your thing, break out your boots, your steps, your glides and moves, and find your place on the dance floor. It will be crowded.

RHRR takes the stage at 7 p.m. Locals Roger Dutton and Friends open for the Rhythm Rustlers at 6 p.m.

The budget for the Idyllwild Summer Concert Series is financed through sponsorships and donations. As of this writing, $16,828 of the $31,000 budget has been raised. Anyone wishing to become a sponsor of the series may contact Ken Dahleen at 951-659-2229. Water and ice sales at the concert venue are donated to help fund the series.

For more information about the Red Hot Rhythm Rustlers, visit www.redhotrhythmrustlers.com or www.musikode.com.