Last Friday, Gov. Jerry Brown declared a state of emergency due to the number of dead and dying trees resulting from the four-year drought. He also wrote U.S. Secretary of Agriculture Tom Vilsack seeking help to mitigate this forest crisis.

“California is facing the worst epidemic of tree mortality in its modern history,” said Brown in his letter to Vilsack. “… A crisis of this magnitude demands action on all fronts.”

Brown cited several reasons for issuing the Emergency Proclamation. The U.S. Forest Service recently estimated that more than 22 million trees have already died in California due to current conditions.

The tree die-off is of such a scale that it significantly worsens wildfire risk in many areas of the state and presents life-safety risks from falling trees to Californians living in rural, forested communities.

Brown has ordered multiple state agencies to take actions to mitigate these threats. A task force composed of Cal Fire, the state departments of Natural Resources and Transportation along with the Energy Commission will identify areas of the state that represent high-hazard zones for wildfire and falling trees.

State agencies, utilities and local governments are to undertake efforts to remove dead or dying trees in these high-hazard zones, especially trees threatening power lines, roads or other evacuation corridors.

Brown also ordered Cal Fire and the state Air Resources Board to work together with federal land managers and the U.S. Environmental Protection Agency to expand using prescribed burns. The intent is to reduce fire risk and avoid greater pollution from major wildfires. The goal is to increase the number of days when tree waste from high-hazard areas may be burned.

The press release also states, “The Governor’s Office of Emergency Services and Cal Fire are convening a Task Force on Tree Mortality comprised of state and federal agencies, local governments and utilities that will coordinate emergency protective actions and monitor ongoing conditions.”

He also asked for more help from the Department of Natural Resources Conservation Service. And Brown asked for expediting federal approvals of emergency action on or near federal lands.

“We appreciate the seriousness of the tree mortality situation and we look forward to working closely with the state, private land owners and other partners to address this issue throughout California,” said John Miller, public information officer for the San Bernardino National Forest. 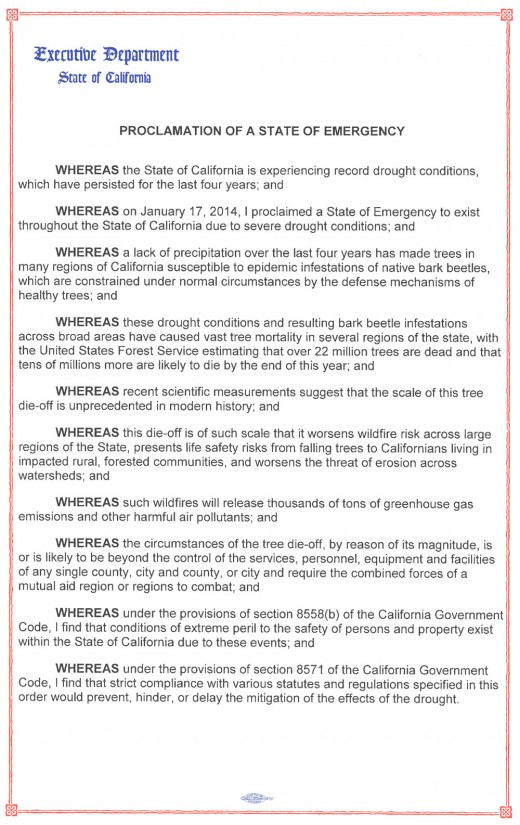