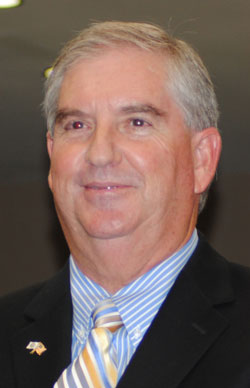 After serving three years as superintendent of Hemet Unified School District, Dr. Barry L. Kayrell announced his plan to retire at the end of this school year. Kayrell has more than 40 years in the education profession. He began his tenure as HUSD superintendent on Oct. 1, 2012.

While he doesn’t have specific plans for after he leaves, Kayrell had two reasons motivating his decision.

“Forty-one years is a long time to do stuff. And my wife had the opportunity to retire from her school district last year,” he said. “Now I go to work and she’s at home.” He added that they have grandchildren and “there’s a point in life where you have other priorities.”

“Barry has been an outstanding leader for Hemet Unified. We will miss his breadth of knowledge, experience, humor and wise counsel. Barry will lead us through June 30,” HUSD Governing Board President Jim Smith said in a press release.

The board discussed efforts to find Kayrell’s replacement. They unanimously decided to hire a search firm to help. A proposal will be sent out within the next few days.

In 2012 when Kayrell’s hiring was announced, former Idyllwild trustee and then-board President Bill Sanborn said, “[Kayrell] shines really obviously. He’s well respected, well liked and a real asset.” Sanborn thought Kayrell was so impressive that if he turned the down the offer the board would re-advertise the position.

But his tenure has been controversial. In November 2014, the Hemet Teachers Association threatened to organize a work stoppage because of salary negotiations. Ultimately, the district and HTA arrived at an agreement in January 2015, after a mediated fact-finding process was initiated.

Current Idyllwild Trustee and Vice President Vic Scavarda was not totally surprised by Kayrell’s announcement at the Jan. 19 board meeting.

“‘Dr. Kayrell has always guided the district to meet his high standards of management,” Scavarda said in an email. “He can be depended upon to carefully consider all options, and to advise the board to ‘take the high road, with no shortcuts’ even in the face of criticism. His shoes will be very tough to fill.

“As Dr. K. said at the last board meeting, ‘There’s a beginning and an end to everything, including careers,’” Scavarda added. “And I suppose that he just felt it was time.”

Describing his accomplishments and retirement, Kayrell said, “[T]he district’s finances are in great shape, maybe [with] even a little bit of growth, and we’ve hired and promoted a lot of great staff.”

Moving forward, Scavarda hopes “the board [will] hire a superintendent that will continue the work we have begun, building strong partnerships with teachers, staff, parents and kids. After all, we are all in this together.”

In the district’s press release, Kayrell said, “I have been honored to be part of a very dedicated group of educational professionals that make a difference in the lives of the students we serve.”