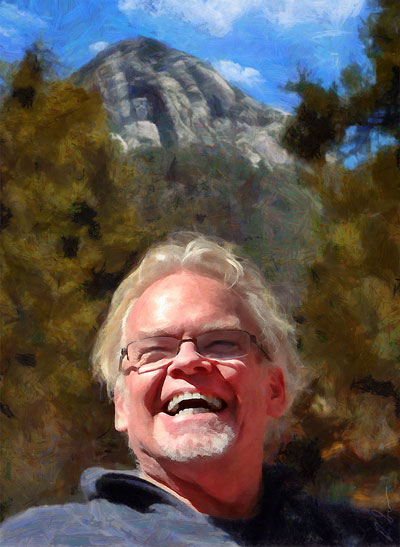 Pedro was predeceased by his parents, Edward P. Anderson (Lt. Col. US Army, Ret.) and Doris H. Anderson. He is survived by his beloved daughter Gemini, a graduate of Idyllwild Arts Academy and the Royal Welsh College of Music and Drama, currently pursuing her Ph.D. at Cardiff University; sister Sue Anderson of Idyllwild; and former wife Betty Ginsberg Anderson of Idyllwild and La Jolla; as well as cousins and numerous friends who loved him dearly.

His life in a military family was varied, as they moved from place to place across America and Europe; this nurtured in him the capacity to perceive life from a variety of perspectives. This capacity is reflected in his writings, his pen-and-ink drawings, and his music; it was also reflected in the depth of his ability to be empathetic to other people and their views.

His education was extensive, attending both the University of Arizona (Go Wild Cats!) and Southwest Texas State University, before pursuing his masters at the acclaimed University of Iowa Writers Workshop.

As a young man in Tucson, Arizona, his love of literature led to a career in teaching English Literature at both high school and college levels. His love of music led to joining local favorites Dr. Crayola and the Sophomores.

He and his wife Betty — a gifted singer in her own right — formed Betty and the Bebops. They also appeared on the hit TV show “ER,” both acting and singing. He also was an accomplished writer, most lately focusing on a fictionalized account of his early life in Colorado. However, he always considered his greatest accomplishment to be his daughter Gemini.

Since moving to Idyllwild in 2010, Pedro was best known for his Saturday-night gigs at Higher Grounds, both as a solo performer and with his band Pedro and the Pages. Saturday nights in “Pedro’s Living Room” packed the house not only due to his musical ability, but also due to his ability to create an atmosphere of connection and community by breaking down the wall between “entertainer” and “audience.”

Quite the raconteur, his between-song banter ranged from self-deprecating humor to profound and heartfelt insights. It was not unusual for the room to be roaring with laughter and moved to tears within the same show. He also was involved in many groups in Idyllwild and truly was an integral part of our community.

To celebrate his life and his legacy, there will be a tribute to him at Higher Grounds from 6:30 to 9 p.m. Saturday, Feb. 13. Because he was so loved by so many, it is asked that you bring chairs or cushions to sit on.