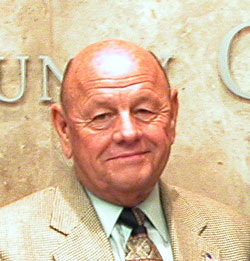 Venable served as county supervisor, representing the 3rd district that includes Idyllwild, from 1996 to 2004. Prior to his election, Venable served as a Hemet City councilman. A pilot, Venable had long operated his family’s business, the Hemet Valley Flying Service, founded by his father.

Venable was defeated for re-election by current State Sen. Jeff Stone. Venable’s 3rd District had been redrawn in 2001, adding Murrieta and Temecula and removing older communities Banning, Beaumont, Nuevo and Juniper Flats more familiar with incumbent Venable. Stone remembered Venable fondly. “I could always count on Jim — and often did — for advice, especially when it came to issues involving the communities of his beloved San Jacinto Valley,” said Stone. “His service to all the people of Riverside County was invaluable during a time of unprecedented growth, and his many positive contributions helped improve the quality of life for the people who call it home.”

Mary Moreland served as Venable’s senior legislative assistant for his first four years as supervisor, then as his chief of staff for the last four. “I was with him the whole time,” said Moreland. “He was a larger-than-life personality. He really cared about his constituents — as a change agent to make their lives better. He performed public service for all the right reasons. He was always about just getting it done.

“He was such an important part of my life. I had dinner with the whole Venable clan a little over a month ago. I’m heartbroken at his passing.”

Kenny Graff also served as staff when Venable was supervisor. “Before that, I worked for him as a pilot at his flying service,” said Graff. “I had known him since I was 12. He took a lot of kids under his wings. He was like that. I used to ride my bike out to the airport. He gave me a job cleaning the hangers and washing the planes. He raised a number of us up to be pilots.”

Rick Hoffman also worked for Venable at Hemet Valley Flying Service. He then served during Venable’s first term as his chief of staff. “Mary [Moreland] and I started together,” said Hoffman. “After the first term, when I went to Transportation, she took over as chief. The supervisor was a wonderful guy to work for. He cared a lot for his people. He deserves all the recognition he is receiving.”

In memory of former Supervisor Venable, the American flag, California flag and the POW/MIA flag will be flown at half-staff at all county-owned and leased facilities until March 25.

Services will be held at 11 a.m. Thursday, March 24, in the amphitheater at the Ramona Bowl, 27400 Ramona Bowl Road in Hemet. A reception will follow at the bowl. Members of the public are invited to attend.