At the end of February, Rep. Dr. Raul Ruiz’s wildfire bill was passed in the House of Representatives.

H.R. 1009 targets disaster-relief funds to victims of wildfire and their communities. He wanted to ensure they have access to the same resources as victims of other natural disasters. The funds will be available whether or not the president declares the fire a major disaster.”

“The problem currently is that states are able to receive Fire Management Assistance Grants in order to help fight the most severe wildfires and prevent them from escalating to become a major disaster,” wrote Hernán Quintas, Ruiz’s press secretary. “These grants are largely successful and helped put out the Mountain and Silver fires from a few years ago. Unfortunately, when the fire is extinguished, states cannot access Hazard Mitigation Grant Program funds to help with post-fire mitigation because the fire was never declared a major disaster.

Ruiz introduced the bill after the Mountain Fire in 2013 and again last spring. In March 2014, he visited the burned area and spent time with local fire officials and the Mountain Communities Fire Safe Council to get more ideas about the proposal.

Co-sponsoring the bill with Ruiz was Rep. Jared Polis (D) of Colorado.

Their bill language was incorporated into the FEMA Disaster Assistance Reform Act of 2015 which is H.R. 1471. The bill passed the House on Feb. 29 and is now in the Senate before the Homeland Security and Government Affairs Committee.

The House report on the bill acknowledged that small and rural communities tend not to receive disaster assistance in “fair and equitable manner” compared to larger communities.

The report also states that the legislative change is intended to allow communities to use the FMAG funds for mitigation and recovery efforts, as well as immediate responses to wildfires.

“The committee urges FEMA to encourage states receiving increased hazard mitigation assistance, because it received a FMAG to allocate this assistance to help communities that were affected by the wildfires that were covered by the grant,” according to the report.

The report estimates that the additional cost of mitigating wildfire damage will be about $6 million annually.

In addition to wildfires, H.R. 1471 also changes language for funding for earthquake disasters. The new language states “activities to help reduce the risk of future damage, hardship, loss or suffering in an area affected by earthquake hazards are eligible for hazard mitigation grant program assistance from FEMA.” 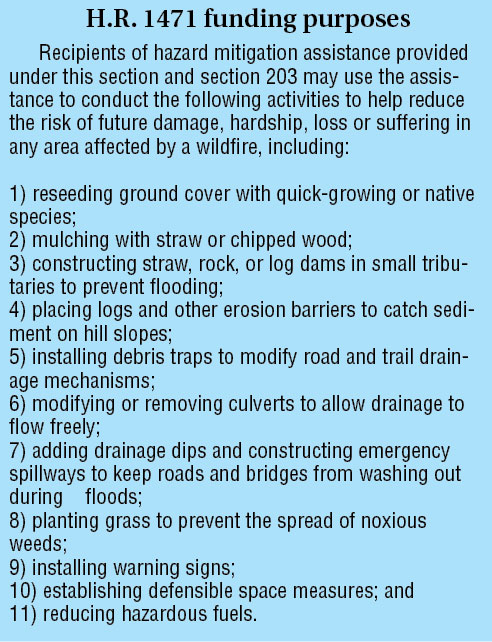