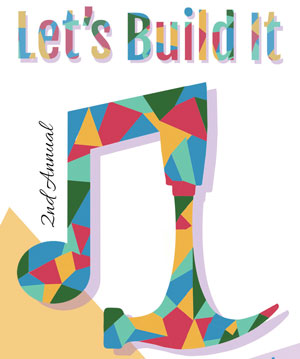 The second-annual “Let’s Build It” fundraiser, to build the Idyllwild Community Center at the Butterfield Commons on Strawberry Creek, will be from 1 to 5 p.m. Saturday, June 11.

Music will fill the skies at the Idyllwild Arts campus’ French Quarter as if the annual Jazz in the Pines Festival was happening two months early.

“This concert will provide an afternoon of amazing music and will help us come closer to the goal of building the Idyllwild Community Center,” said Janice Lyle, the San Jacinto Mountain Community Center board president. “It’s a great way to share a good time with your neighbors and keep the momentum going for this important community resource.”

Barnaby Finch has again offered his producing talents to bring a squadron of gifted musicians to town in order to entertain the audience and raise money for the future community center.

Food and beverages will be available, as well as dozens of friends with whom to share the afternoon and warm weather. Brewer Don Put will again offer a selection of his craft beers.

“I’m so excited,” said Jeri Sue Haney, a BCCC member. “I’m having a blast planning it with Suzy [Capparelli] and Trish [Tuley].”

Johnson plays guitar and sings, and Thorsen plays acoustic bass. Their music defies categorization, but might be described as jazzy folk.

“Jazzgrass is an appealing cross between bluegrass and jazz. The band features dobro, mandolin, and fiddle, as well as piano, bass, and drums. The music is melodic and populist, with many a foot-tapping tune, and virtuoso hillbilly pickin’ featured throughout,” wrote Finch.

This group is composed of several local musicians. Finch put it together in 1999. The original version included Sean and Sara Watkins who become Nickel Creek. Today it includes Finch on keys; Don Reed on mandolin, dobro and guitar; Sam Zorn on fiddle; Sean Longstreet on guitar; Bill Saitta on bass; and Jeff Olsen on drums.

The Peter Sprague Soul Project will feature Leonard Patton as singer. Sprague is a world-renowned guitarist, producer and composer from San Diego.

Bogart returns to the Idyllwild stage accompanied by Idyllwild favorite Alvarez. She sings and plays sax and sometimes piano. Alvarez brings his blues with vocal and guitar.

“Come on out and dance your heart out,” said Finch.

Only 250 tickets are available for the fundraiser. Before June 4, the price is $45 and available online or at the Idyllwild Pharmacy. After June 4, ticket prices rise to $50. There will also be a raffle for bottles of wine, Haney said. The raffle tickets are $5 or five tickets for $20.

“Four Seasons Nursery will beautify the surroundings with decorative plants for staging and table decorations,” wrote Lytle. Before the concert’s final note, table plants on the tables will be for sale, too.

“Profits from this event, as well as future events, will go totally to the actual community center building to be constructed after the amphitheater is completed,” promised Capparelli, chair of the BCCC.