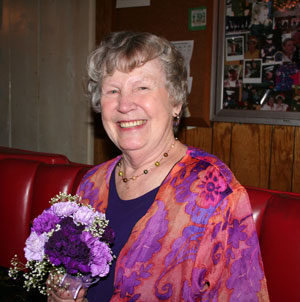 Elaine Jane “E.J.” Weiler, a long-time resident of Idyllwild, passed away peacefully at home in her sleep on Monday, July 4, 2016.

Elaine was born in Aurora, Illinois, on Aug. 19, 1929, to Andrew Hayden and Catherine Thill-Hayden. She graduated from Madonna High School in Aurora in 1947.

Elaine married Cyril F. Weiler (Cy), also of Aurora, on June 16, 1951. After he graduated from Notre Dame University, Cy’s civil engineering positions took the couple to many cities over the next decades, including Juneau, Alaska, and Daly City, Palo Alto, Monterey and, finally, Escondido. During this time, Elaine and Cy became the proud parents of three children, Michael, Catherine (deceased, 2010) and Karen.

While living in Escondido, the Weiler family belonged to the St. Mary’s Catholic Parish and were active supporters of parish activities, especially the Boy and Girl scouts troops and Explorer Post. Under the leadership and guidance of Cy and Elaine, the scouting troops were dedicated to public service.

One of the organizations supported by the Boy Scouts and Explorers was the Idyllwild Institute Fiesta. The frequent summer trips made to Idyllwild to perform maintenance projects at the fiesta introduced Idyllwild to Elaine, and she fell in love with the community and the surrounding mountains.

After Cy died in 1972, Elaine was employed at the San Diego North County Courts in Vista where she was a deputy county clerk and chief arbitration clerk for 15 years. Upon retirement, she made the decision to move to her beloved Idyllwild permanently, and made her home on Scenic Drive where she could “sleep late, shovel snow and walk her dog” for the next 29 years until her passing.

Elaine was a member of the Red Hat Society, and a volunteer at the Nature Center and Idyllwild Area Historical Society and Museum. She was a member of Forest Folk Inc., a nonprofit organization to involve, enrich and empower seniors 50 and over.

She loved all animals, and frequent trips “down the mountain” to Hemet were required to maintain her supply of raw peanuts that she used to stock feeders on her back deck to the enjoyment of the local squirrels and raccoons. Her front yard contained many suet baskets, bird feeders and hummingbird feeders.

Elaine was a staunch supporter of dog rescue and her house became a “home” to many orphaned dogs, cats and rabbits. Her final housemates were her beloved dogs Beau, Cassie, Girlfriend and Gary’s dog Otis. She spent time volunteering at Sadie’s Clinic and Animal Rescue Friends (ARF).

Elaine was also a very artistic “crafter” with talents ranging from tole painting to knitting and needlework. Elaine loved making gifts for family and friends over the years. She also was part of a local knitting group and was just learning to spin her own yarn for her knitting projects.

There will be a potluck and refreshments in Elaine’s honor following the service.