The 23rd-annual Jazz in the Pines festival is only a week away with anticipation building and visions of sweet jazz hovering over the valley.

The first notes will begin setting feet “a-tapping and heads bobbin’” at 10:45 a.m. Saturday, Aug. 20. But the ever-popular Patrons Dinner is Friday night.

This year, the dinner’s theme is “Magic in the Forest,” said organizers Pam Goldwasser and Anne Erikson.

“Pamela [Jordan, Idyllwild Arts Foundation president] has often talked about the unique feature of Idyllwild Arts, which sets it apart from other boarding schools, which is its locality, which she refers to as the magic of Idyllwild,” they related.

“Our environment influences the students’ creativity and is unique,” they proudly said.

Attendees at the dinner will experience some first-hand magic during the evening and throughout the crowd as it dines, mixes and talks, Erikson promised. Without revealing details, she promised that attendees would see happenings during the festivities. “Be prepared, because there is no simple stage show,” they confirmed.

During the evening, the magical voice of Deanna Bogart will entertain the patrons as well as the magical music of Besos de Coco.

Bogart will be accompanied by Chuck Alvarez, Bill Saitta and Jeff Olson.

But jazz Chair John Newman reminds us, “The Patrons Dinner always inspires spontaneous ‘sit-ins’ from other musicians, so it is a lively, interactive, improvisational party.”

While the performers enrapture the diners, Idyllwild Arts Lead Chef Chris Stroud will entice them with two carving sites, one with black-and-bleu prime rib. Then when dessert entreats the diners, they can expect a star-topped fruit wand threaded with various pieces of fruit. But some may favor the always attractive and enchanting chocolate choices.

Finally, both Erikson and Goldwasser referred to another magical moment, one they both enjoy and that occurs at each dinner. “Seeing the crowd get up to dance. Everyone dances with everyone,” Erikson wrote. Separately, Goldwasser said, describing one of her favorite moments as “the dancing toward the end of the evening with the last patrons and all the volunteers.”

These moments will magically re-occur next Friday. Just as one patron said presciently to Goldwasser last year, “This is the magical Idyllwild that I have always loved.”

For $350, a patron also will receive many other benefits (see the accompanying box). Patrons Dinner tickets are available online at the festival’s website (www.jazzinthepines.com) or in town at the school’s new shop on N. Circle Drive. 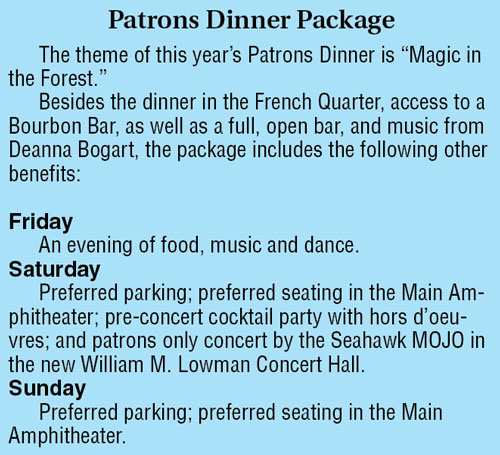