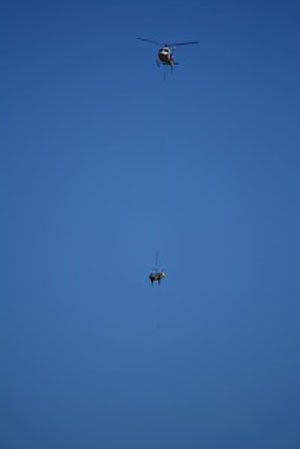 On Saturday, Aug. 27, a horse and rider tumbled into a deep and steep ravine in the Apple Canyon area. The rider, who incurred minor injuries, is a member of the U.S. Forest Service Volunteers, according to Lt. Dean Spivacke of the Riverside County Sheriff’s Hemet Station. The incident occurred about 3.5 miles up Spitler Peak Trail.

On Sunday, the volunteers made more efforts to free the animal. By the middle of the morning, the Sheriff’s Department and the Riverside County Fire Department were called.

After verifying the rider did not need help, the Riverside Mountain Rescue Unit was released since the rescue of large, non-human animals is not part of their mission.

The Horse & Animal Rescue Team from Riverside was contacted, as well as the sheriff’s Aviation unit.

After several flights over the scene, the Aviation Unit concluded that it was too dangerous to attempt an extrication Sunday afternoon. The altitude of the ravine was nearly 6,000 feet, temperatures were in the high 90s and the terrain was steep and slippery, Spivacke explained.


The owner and others stayed with the horse Sunday night.

On Monday morning, HART and the Aviation Unit were able to recover the horse safely about 10:30 a.m.