Holiday entertainment will be plentiful in Idyllwild. And while Burl Ives won’t be traveling to Idyllwild to sing his favorite Christmas ballad this year, the Idyllwild Actors Theatre will present “A Holly Jolly Christmas” as its 2016 Christmas production.

The company will perform a variety of tales to warm the hearts and make even the most cynical Scrooge laugh and cry.

The selections bring out some of the best from stellar and familiar authors — O. Henry, Pearl S. Buck, James Thurber and more.

IAT founder and President Suzanne Avalon says, “These scenes, along with the musical selections, will get your Christmas groove on.”

The “Santaland Diaries,” written by David Sedaris, offers an elf’s view of the hustle and bustle Christmas preparation creates in the commercial side of the holiday noted for giving. Teel will be relating his irreverent elf-like observations throughout the evening,

Returning is the very popular feature from past holiday performances, “The Gifts of the Magi,” featuring both Marsh and O’Farrell. The audience will watch how deeply one’s love will influence the gift they give to their love.

Christmas humor will be the focus of a surprising rendition of Clement Moore’s famous and traditional poem, “A Visit from St. Nicholas,” or, as we 21st-century denizens of the Hill know it, “Twas the Night Before Christmas.”

And the troupe will intersperse the evening’s gaieties with special Christmas and holiday music, arranged by Rayliss.

IAT will present two performances, one on Friday, Dec. 16, followed by one Saturday, Dec. 17. Both start at 7:30 p.m. at the Rainbow Inn. Each night, the doors open at 7 p.m. for a pre-performance reception.

The Rainbow Inn is at 54420 S. Circle Drive in Idyllwild. 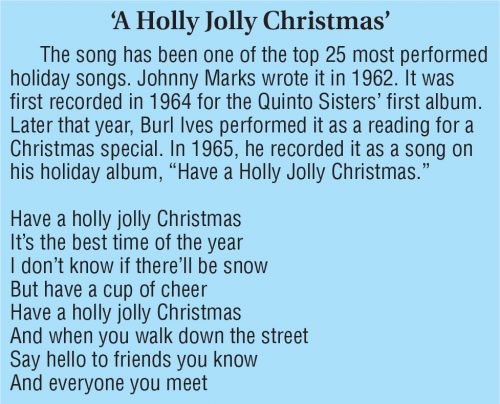 Tickets are $18 for each night and can be bought at the door or online at idyllwildactorstheatre.com.