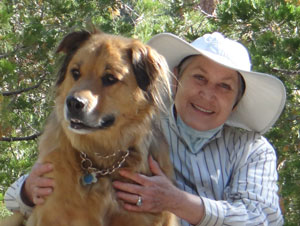 Pamela Fojtik (nee Killingsworth), beloved wife of Charles “Chic” Fojtik and 12-year Idyllwild resident, passed away on Christmas Day in 2016. She had been struggling for several years with a breathing disorder and a weakened heart.

Born in Alabama in 1948, she was raised by her grandparents until moving to Lakeland, Florida. Pamela attended Florida State University for two years.

In 2004, after 30 years in Manhattan Beach, she and Chic chose to move to Idyllwild. Within months of arriving, the couple adopted two cats and their ARF rescue dog, Burly, who became her constant companion. His passing this past November left her devastated.

Her life revolved around service to the Garden Club and Mountain Disaster Preparedness, maintaining the family grounds, and bringing joy to everyone around her with her infectious smile and laugh. Pamela loved her time in Idyllwild, saying it was what every community should be, “a place where people set aside their differences and instead enjoy their similarities.”

A Celebration of Life was held on Jan. 11. Apologies are offered to those who did not hear of it in time to attend. Special thanks to Edith Brix, Ashley Stewart, Deb Gmeiner and all those whose hard work made the time very special. In lieu of flowers and such, please make a donation in her name to ARF, MDP or the other worthy Idyllwild nonprofits.