Seventeen cities, and one Indian Tribe, contract with the Riverside County Sheriff’s Department for police services. In the past several years, as the county’s budget problems have stabilized, but not been eliminated, most of the cities have expressed concerns over increasing costs of their contracts.

In the past, their options were to negotiate fewer services and coverage from the Sheriff’s Department or decide to establish their own police department, as some cities such as Riverside and Hemet have.

The sheriff’s costs are based on the department’s current salaries and equipment costs. There is no “profit margin” and the sheriff cannot subsidize any city.

The costs for other sheriff’s operations, such as jails, courts and the coroner, are not included in the costs of the service to the cities.

For fiscal year 2016-17, the Sheriff Stan Sniff just notified the cities that the annual increase would be 5.14 percent. Labor costs were the cause for the increase.

But in 2015, the contract cities decided to explore another option — create a joint powers agency to provide them with police services. Last month, Matrix, the consultants who prepared the study, began to discuss the results with the cities of a regional police department.

Simply, Matrix Consulting Group, the authors of the study, found that a JPA could provide the same level of service at less cost for most of these cities. The feasibility study was based on only nine of the cities forming the JPA — Coachella, Jurupa Valley, Lake Elsinore, Menifee, Moreno Valley, Perris, San Jacinto, Temecula and Wildomar.

Maxtrix estimated that the first-year costs of police services from the JPA would decrease for six of the cities. For Wildomar, which has the lowest-cost contract, the JPA costs would be 37.7 percent greater. Menifee’s costs would be 13 percent more and Coachella would see a 6-percent increase.

The biggest savings were for Moreno Valley, Temecula and Lake Elsinore. Their savings range from nearly 20 percent to 15 percent. Moreno Valley’s costs with the county sheriff are nearly $40 million annually. Temecula pays about $25 million. They are the top two and Jurupa Valley, which pays about $16 million, is the third highest.

The principal reason for the savings is the state’s retirement plan. The JPA would be hiring staff in 2017. Even if salaries were the same, the retirement policy would be less than for existing sheriff or police staff.

As a new agency, the JPA would not have any unfunded liability for past retirement commitments or current healthcare commitments for retirees. The study also assumed that employee benefits, such as retirement and healthcare, would be defined contributions rather than defined benefits.

Matrix has made presentations at several of the city council meetings, but so far, the cities are still digesting the report and no formal effort has been made. Riverside County’s budget for fiscal year 2017-18 is under review and in the next month, the anticipated contract costs for next fiscal year will be public.

The cities’ reaction to those costs will signal what the next step may be. 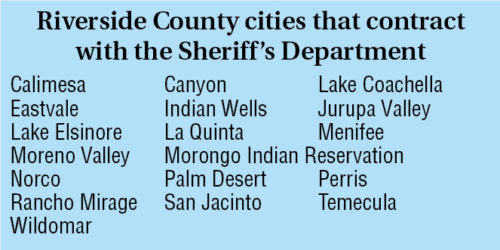