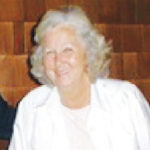 Dorothy Hawthorne, 86, passed away peacefully surrounded by family Monday, July 3, 2017. She had a long struggle with congenital heart disease and kidney failure. She just couldn’t let go of her beloved and devoted husband, Tom, whom she was married to for 69 years. He was her whole life!

Dorothy was born in Los Angeles in 1930. She met her darling Tom at age 16 while working at a Thrifty Drug Store soda fountain. They married in 1948 and had six children, three having predeceased them.

Dorothy collected newspapers to help support the war effort during World War II. She served as a Gray Lady at Balboa Naval Hospital during the Vietnam War, and she and Tom more recently helped fund the Hawthorne Veteran and Family Resource Center in Escondido.

While raising their children, Dorothy supported Tom in his successful 50-year career as the Caterpillar tractor dealer at Hawthorne Machinery Company. Tom and Dorothy have traveled the world and enjoyed many unique adventures together, but home is Escondido and their firm foundation of faith is rooted in the Community of Christ Church that owns and operates Buckhorn Camp.

Dorothy will be remembered by those who loved her as a quiet, gentle, generous woman who was always there to help others, bring them oranges and help however she could. She had an unusually tender heart and was a true servant. She was kind to absolutely everyone she encountered — from the clerk at the dry cleaners to the dignitaries she met in their travels around the world.

Dorothy once made fresh-squeezed orange juice for the King of Tonga who was visiting San Diego and their dealership. She was known for her wonderful, delicious oranges and contributed thousands of them to be included in sack lunches distributed by Interfaith Community Services in Escondido.

She adored her garden and every living, growing thing! She spent many hours watering and tending to her plants and flowers, and was often surrounded by a bevy of birds, dogs, cats, ducks, chickens and sheep over the years. Kittens were her favorite!

Dorothy used to make little gift bags with candy, hot chocolate, dog balls, etc., for Chris’ guests at Silver Pines Lodge. They helped with the annual Christmas dinner for almost 20 years, and Dorothy, Tom and Chris’ sister Debbie were partners with Chris in obtaining and refurbishing Creekstone Inn. She loved Idyllwild and supported Chris in everything she did.

A memorial service will be held for Dorothy at 2 p.m. Friday, July 21, at The Church at Rancho Bernardo, 11740 Bernardo Plaza Court, San Diego. In lieu of flowers, Dorothy would have loved that donations be made to North County Interfaith Community Services, Outreach International or the San Diego Zoo.