On Saturday, June 3, at a small gathering of Camp Ronald McDonald’s most loyal supporters, founder Dr. Stuart Siegel and Fran Wiley, RN and longtime leader and volunteer, shared their memories of the 35 years since the camp’s founding.

When Siegel founded Camp Ronald McDonald in Mountain Center, the goal was a simple one, with an altogether uncertain outcome. Bring a group of children with cancer up to the mountains to have the normal experiences summer campers have had for generations — no physiological sessions or formal therapy or focus on their white-cell counts, just the experience of being together in a summer-camp environment, being themselves and doing things they had not dreamed they could do.

Thirty-five years ago, the first session had 60 kids. At the end of the session, the results seemed conclusive. “By the end of the session, I remember this vividly. We were all standing there waiting for the buses to arrive,” he remembered. “The session had gone incredibly, it could not have gone better and we were all standing there crying because no one wanted to leave. I knew we had something that worked.”

When Siegel wrote that 35 years ago, 85 percent of children with cancer would not survive their diagnosis. Today, that trend has reversed 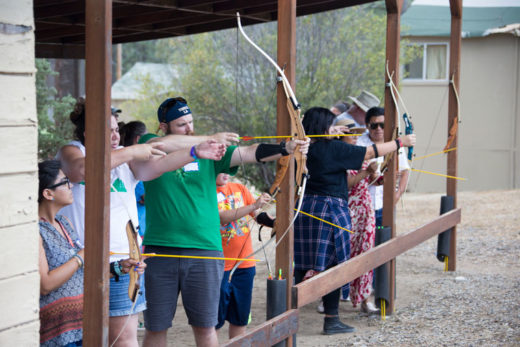 with more than 80 percent surviving into adulthood.

What Camp Ronald McDonald for Good Times gave these children was a chance to regain their self-esteem and self-confidence — to have a break from worrying about their “condition” and provide an opportunity to just be themselves, with other children like them.

“That’s the whole problem,” said Siegel. “Cancer is such a rare disease in kids they don’t realize that there are other people that have this. Bringing kids together, they discover they’re not alone and have other kids they can talk to.”

In 35 years, the camp’s sessions have grown from one a year with 60 campers to 12 sessions serving more than 1,800 campers. More than 42,000 campers have experienced the healing effects of the mountain camp. Volunteer oncologists and nurses work with camp staff to evolve this summer home to serve more campers.

On June 13, Los Angeles County Supervisor Sheila Kuehl presented the camp a commendation for the program’s 35 years of serving children and families in the Southern California region.

“What we did was to take children out of the terrible hospital environment and let them be as normal as possible,” said Siegel. That therapy has produced extraordinary results.