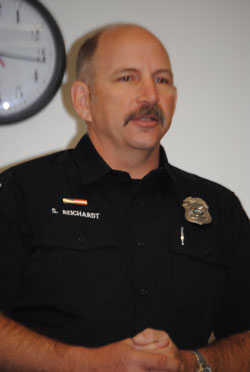 September was National Preparedness Month. While it was nearly over when he spoke, Reichardt addressed the issue in the context of the recent emergencies created by hurricanes and earthquakes, one as close as Mexico.

He noted that a major difference between hurricanes and earthquakes is the amount of time preceding the event. Hurricanes can be seen coming — days, sometimes a week, before it arrives. This gives residents time to prepare. Earthquakes are the opposite. Even with the new earthquake-detection systems, the advance notice is limited to 1 or 2 minutes or less.

“In Southern California, with earthquakes and fire, there is little time for warning,” Reichardt stressed. “Keep gas in your car and remember that utilities are easily and usually affected. Earthquake preparedness is a lot like fire.”

Everyone needs a preparedness kit, with a change of clothes, bottles of water and important legal documents. Water is the key, he emphasized. Water mains can break and they are underground. It can take days to repair them, so it is important to have adequate water available.

“As an emergency manager, I’m most concerned about water infrastructure damage throughout Southern California,” Reichardt said. “Even a temporary fix can take a while. Remember, you can’t live without water.”

CNBC reported that “the Metropolitan Water District of Southern California, a water wholesaler for nearly 19 million people, uses the Colorado River Aqueduct and said it could recover in six months from a disruption if there’s a big quake on the southern portion of the San Andreas fault.” During the recovery, MWD’s local reservoirs and groundwater would be interim water sources.

He urged everyone to have a plan for themselves and their families. Practicing how to implement the plan is important, too. He does this with his son, Reichardt said.

When asked how to convince people to prepare, he advised thinking of preparedness as a series of small tasks and not a big, long-term effort. First, gather supplies for two to three days, such as water, food and medicine. Then, add what you might be needed for another day, and continue to stretch your preparedness baskets into longer periods.

“[People] probably have the stuff, but it’s spread throughout the house. Ask where the flashlight is and extra batteries?” he suggested.

Besides supplies, particularly water, he also emphasized knowing how to get emergency information. “Be informed. Knowing hazards and how to get information during an emergency or disaster can be critical,” he added.

The common emergency responses are calling 911 and calling neighbors. But in a major emergency and disaster, phone lines can be exceeded. They require more bandwidth than text messages.

Consequently, he recommended having a set of emergency agencies that use Twitter to send messages, such as Cal Fire, California Highway Patrol, the Riverside County Sheriff’s Department and EMD or websites with current information, such as the Town Crier or Idyllwild Area Emergencies. Facebook is less effective because, as Reichardt said, “It is very communication competitive.” How quickly a message gets through depends on “likes” and the frequency of contact between two entities. Twitter distributes immediately and without favoritism.

If more information is necessary, these “tweets” will tell you what sites to visit, he added. He also recommended having somebody, such as family who live in another area or state, available whom you can call with status information and whom others can call to find out your situation or condition.

Preparedness is a mindset, not a specific disaster, Reichardt concluded. For more information on preparedness, visit the EMD site at rivcoready.org.